The word "Gargoyle" originates from the old French word "Gargouille" meaning "throat" but which also describes the gurgling sound of water as it is coming down the downspout.  In architecture, and specifically in Gothic architecture, a gargoyle is a grotesquely carved figure of a human or animal with an open mouth projecting from the gutter of a building.  It is designed to convey water from a roof and away from the side of a building, thereby preventing rainwater from running down masonry walls and eroding the mortar between. 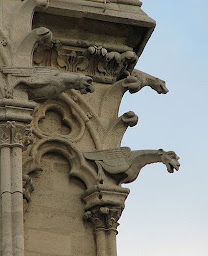 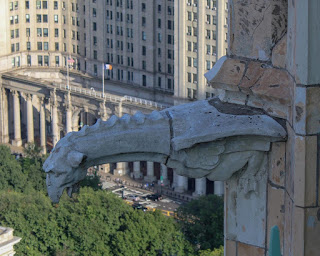 Gargoyles, by definition have a specific, functional purpose—they contain a downspout.  No downspout = no gargoyle.  A grotesque, on the other hand, is a decorative architectural feature carved from stone, frequently depicting a monster or animal of some sort.  Like the dragons jutting out from the 28th floor of the Woolworth Building, they’re an example of skeuomorphism—an ornamental object derived from something that once had functional use. 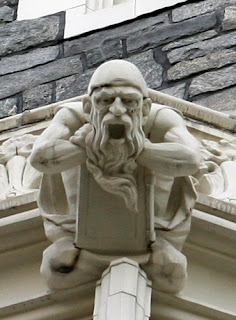 Who among us as children wasn't slightly intimidated by gargoyles?  They were often scary and creepy. Could they come alive and get us (as in the 1972 "Gargoyles" movie about a colony of living and breathing gargoyles)?  Fast forward a few years and we have come a to appreciate their architectural beauty and form.  They are worthy candidates for our art making.  This week's theme, suggested by Jennifer Ransom, is to draw a gargoyle (or grotesque) of your choice.  It can be from a photo (not urban sketching) or done on location.  If you are looking for some gargoyle sightings in New York City, check City College, The Cathedral of St. John the Divine, or St Patrick's Cathedral. So let's look up, get a little grotesque and have some fun.


Consult these sites for some history and inspiration:
The Art of Gargoyles - CBS Sunday Morning
https://youtu.be/3RmaBnm3qoU
A Brief Introduction To The Art Of Gargoyles
https://theculturetrip.com/europe/articles/a-brief-introduction-to-the-art-of-gargoyles/
Exploring the Fantastic History of Gargoyles in Gothic Architecture
https://mymodernmet.com/what-is-a-gargoyle/
New York City’s Spookiest Office Building Gargoyles by Andrew Littlefield https://convene.com/catalyst/new-york-city-office-building-gargoyles/ 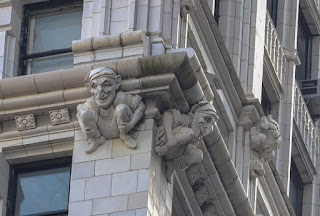 Posted by Cathy Gutterman at 9:23 PM