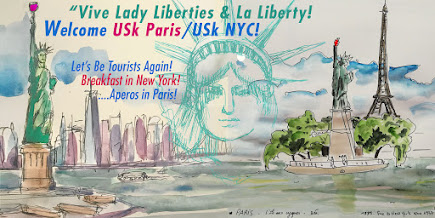 USk Paris and NYC are partnering
to bring you an Urban Sketchers Treasure Hunt
Thanks to our hosts Frederique Fleisch (Paris) and Lois Bender (NYC) for planning and designing this event
*  PLEASE NOTE:  You will need to register for the morning and the afternoon parts separately.
Let’s Be Tourists Again!
Have Breakfast in New York (10 AM) and Les Aperos (Aperitifs) in Paris (4pm)

We're trading cities for a day as we visit the many  “Statues of Liberty!”

Frederic-Auguste Bartholdi was commissioned to design a sculpture with the year 1876 in mind for completion, to commemorate the centennial of the American
Declaration of Independence.  Bartholdi required the assistance of an engineer to address structural issues associated with designing such a colossal copper sculpture. Alexandre-Gustave Eiffel (designer of the Eiffel Tower), was commissioned to design the massive iron pylon and secondary skeletal framework which allows the Statue’s copper skin to move independently yet stand upright.

Old pictures and the history of the construction of Lady Liberty
http://thestatueofliberty.com/history/