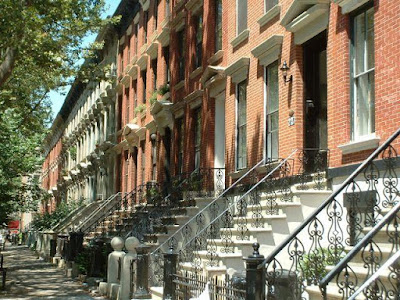 Hunters Point is on the south side of Long Island City. The Historic District is a national historic district that includes 19 contributing buildings along 45th Avenue between 21st and 23rd Streets. They are a set of townhouses built in the late 19th century.  It was listed on the National Register of Historic Places in 1973. 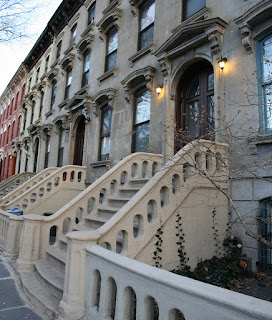 The area used to be part of the Van Alst family’s farming empire. The Van Alst land was purchased by Eliaphas Nott on behalf of Union College in 1861, and then purchased and developed by two fellows named Root and Rust in 1870. Most of the buildings in the historic district are actually from the 1890s, and even in the 19th century this area was considered special – it was “White Collar Row” and home to LIC’s bankers and elected officialdom.

This historic district features a row of forty-seven townhouses built between 1871 and 1890 in the Italianate, French Second Empire and Neo-Greco styles. Original stoops, lintels, pediments, and other details can still be found on many of the homes.

In the late eighteen hundreds the area was home to established families and prosperous citizens including “Battle Axe” Gleason, the last mayor of Long Island City (before the consolidation of New York,) resided on 12th Street (now 45th Avenue).  Gotta love that stache!


DETAILS
WHEN: 10am Sunday September 29th  (As always, wake up late? Come anyway!)

LUNCH:  12:00  Noon - You can bring your lunch or rely on stores and vendors  We will find an outdoor spot in the shade to sit together.

SHOW and TELL:  3 PM.  This is the social part of our day.  We'll meet outdoors - probably at our lunch spot to share our day's drawings and tell thrilling art stories.

-  Anticipate full sun.  Bring a hat.  Sketching can be like sunbathing.  Be prepared.
-  Bring a stool if you own one. It gives you so many more options.