How I assembled a small durable sketchbook.

For a few years, I have been experimenting with sketching on hued paper -- including some very dark papers.  I am also participating in the Sketchbook Project, so I needed tinted paper that fit inside the Sketchbook Projects sketchbook cover, which is a rule for that project.  I took 8-1/2 by 11 inch sheets and cut them down to the proper size

So I assembled several small booklets similar to this and proceeded to sketch in them.  At the time I started, I didn't yet know how I would assemble them.  Each of the little booklets is less than a quarter year thick when closed, and I was able to easily carry them in my purse for spontaneous sketch moments. 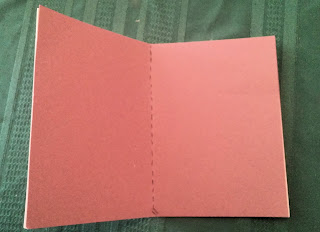 I found a helpful tutorial on Youtube. How to make your own sketchbook: Coptic Stitch Bookbinding produced by Sea Lemon.  It was very helpful.  I learned that I would need to punch some holes in the existing book covers very near the edge. (I used the pointed end on a geometry compass for this) and became worried that the cardboard might tear, so I reinforced it by ironing on an iron-on patch before I poked the holes. I also learned that the process for stitching the segments together was simpler than I thought.  So I did as instructed on the video.

Here you can see what the binding looked like just before I covered it up.  The book now contains 4 of the book segments and the 2 covers.  The stitching took about 15 minutes to do and is too fragile to leave uncovered.  I used ordinary sewing thread in a light brown shade and I kept the stitches loose so that the book can be opened flat without putting any stress on the thread.

Then I took another iron-on patch and used it to cover the binding.  I placed a pencil inside the binding before I ironed it on, because I wanted the binding to stick to the covers only, and be loose enough that the book can be opened flat.  The final photo shows the book opened to pages that are in two different segments.  You can see that one segment is not pulling on the other. 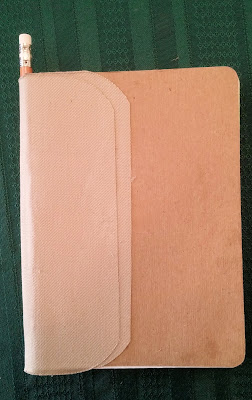 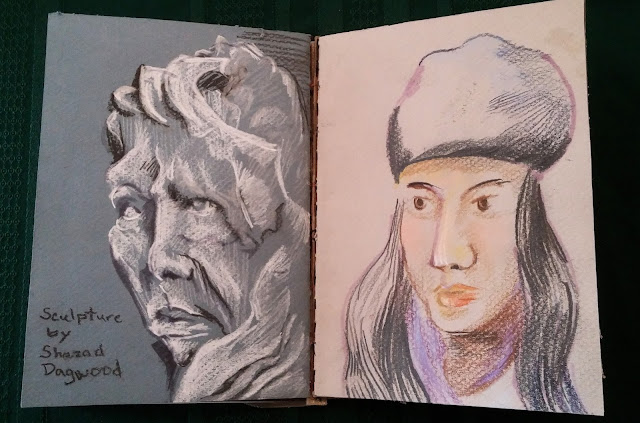