Bond Street is 2 blocks north of Houston Street and about 2 blocks long.  An incredible amount of sketchable New York is packed into those two cobblestone streets. 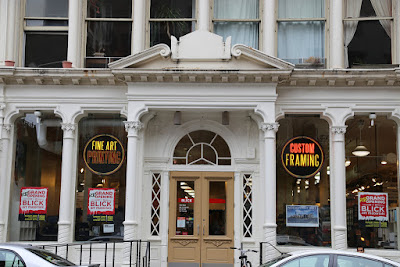 As sketchers you’ll probably recognize 1-5 Bond Street near Broadway, the Robbins & Appleton Building.  This is the NoHo (North of Houston Street) location of Dick Blick.  The building itself is a prime example of the remarkable cast iron architecture that one can find throughout NoHo and up and down Broadway.

The building is both an individual New York City landmark and included within the city’s NoHo Historic District.  At street level, this building looks like many other cast-iron commercial buildings in the area, but a glance upwards reveals a striking mansard roof. Perched at the very top of the building below the central pediment is a gold clock.


24 Bond Street is the current of home of the Gene Frankel Theater.  It was also for years the home of the photographer, Robert Mapelthorpe.  Look up and you’ll see dozens of small, golden statues dancing along the wrought iron and brick. They’re a great addition to the industrial look of the rest of the area.  The statues were created and installed over several years by  Bruce Williams, an artist many people might know from Spring Studio.  Bruce is a resident of 24 Bond.

When and Where:   10 AM at Bond Street off Broadway.  We will spend the entire day on Bond which extends from Broadway, across Lafayette and ends at Bowery.  (see map below)

How:
The closest subway stop is Broadway Lafayette stop on the B,D,F or M trains - walk two blocks north on Broadway.
-   You could also take the R or W to Prince Street, walking three blocks north.

Show and Tell:   3 PM  The social part of our day. Location to be determined.  We will share drawings, good stories and a snack, beer or wine if you're so inclined.


NOTE
-  Bring a portable stool if you have one. It adds to your comfort and increases your sketching possibilities.
-  Dress in layers so you can adjust during the day.

Posted by Mark Leibowitz at 9:06 PM