I’d like everyone to meet my sketching partner from Brazil - Fernanda Vaz de Campos.  During the recent Sketch Swap with Sáo Paulo I was teamed with Fernanda.

Our email exchange started in January, so we’ve been communicating for awhile.  I am very lucky that Fernanda has very strong language skills which made our email exchange very easy and natural.  Fernanda is very active in the Sao Paulo Urban Sketching group.  Her emails revealed a person who is passionate about drawing.  She is an architect but has been thinking about going back to school to take her Master’s Degree with the intention of teaching.  We discovered that we have reverse comfort zones.  Fernanda loves to sketch buildings and finds them much easier to draw.  I am attracted to drawing people.

The theme to the Sketch Swap was "Welcome to My City". The sketch Fernanda sent to me was of MASP (Museu de Arte São Paulo) São Paulo's Art Museum The story that goes with the sketch is that the Såo Paulo USk group went to the museum to sketch, but it's such a big place that they lost each other. Fernanda ended up sitting in a Starbucks sketching the museum 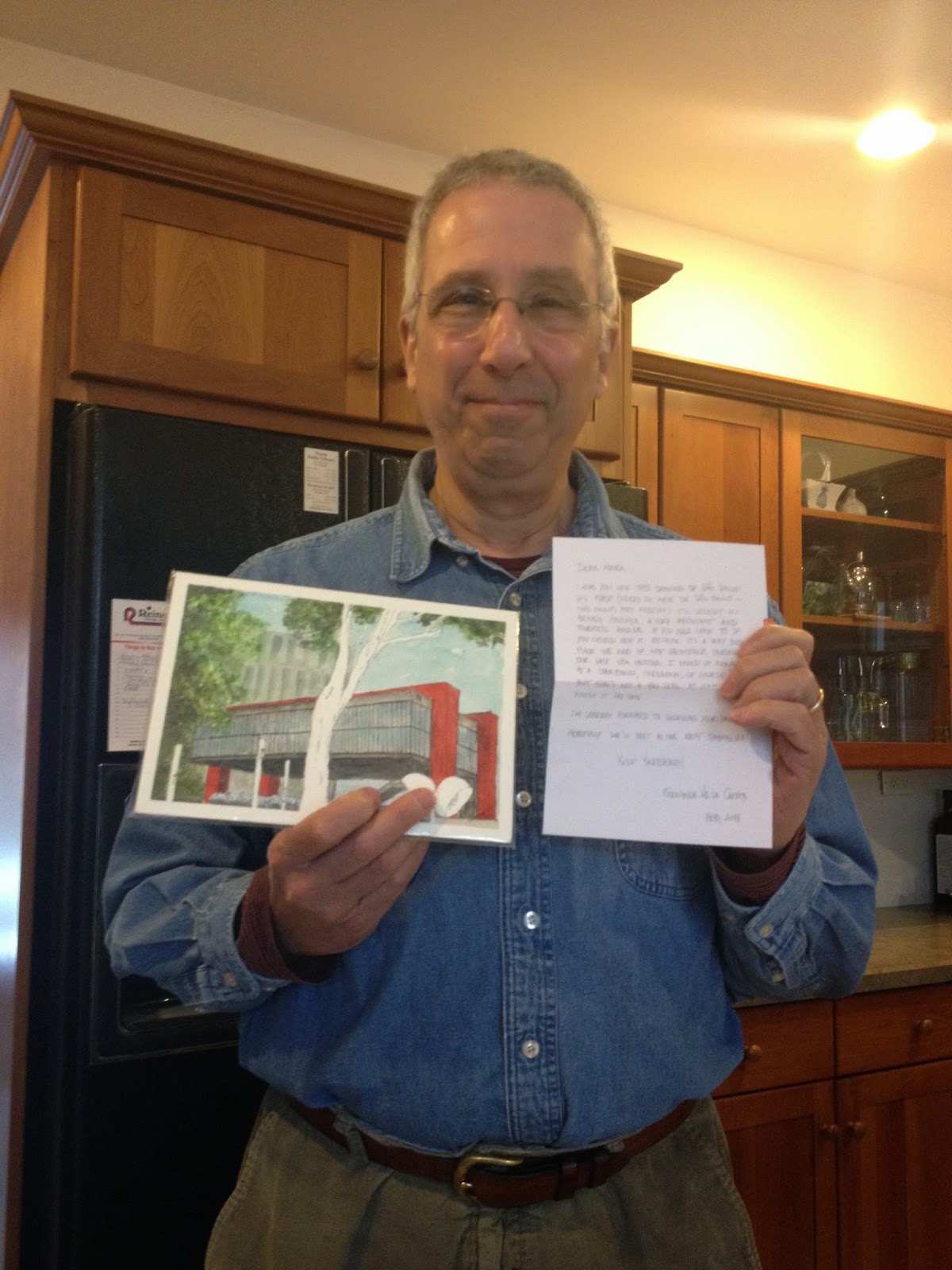 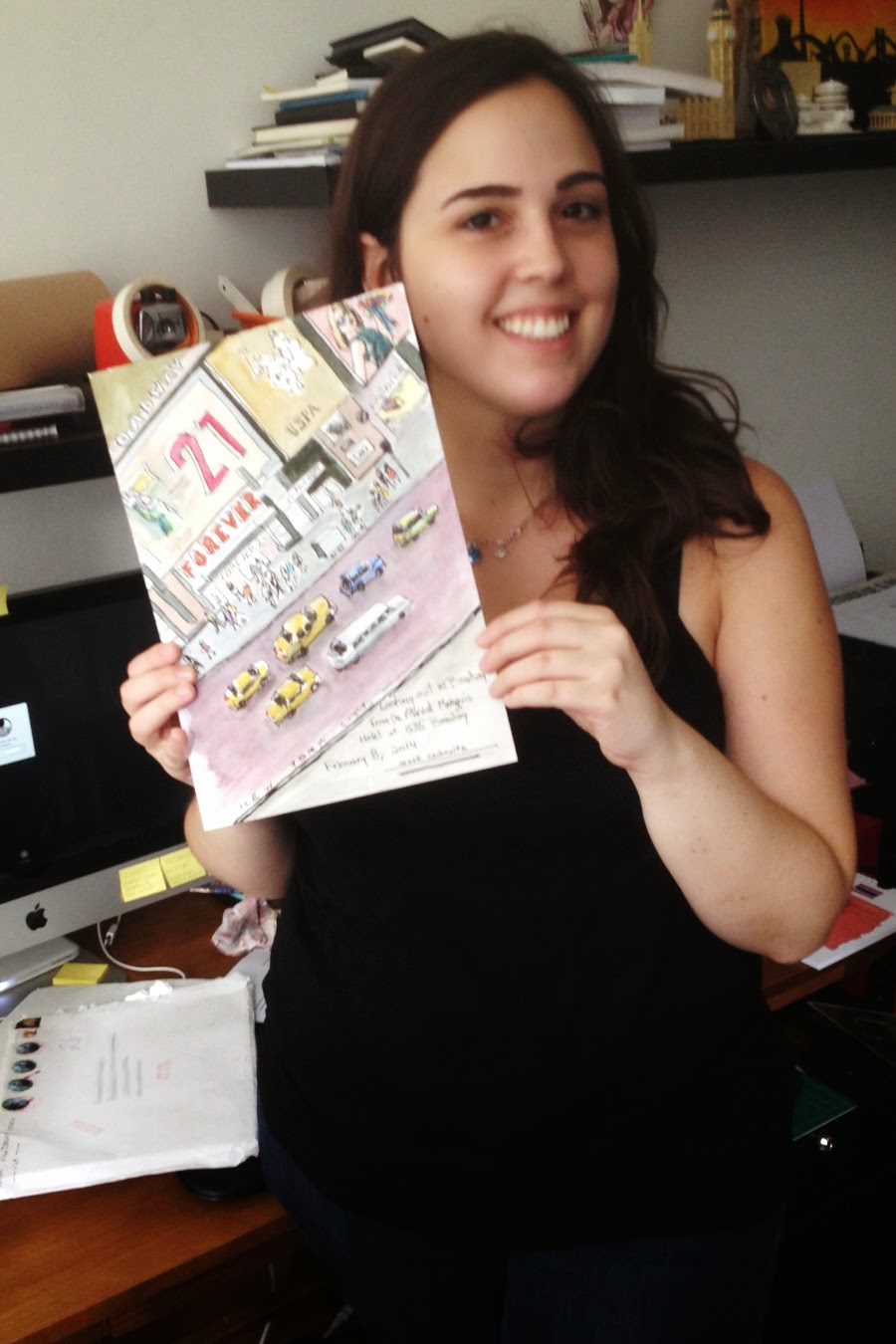 Fernanda visited to NYC last January and stayed in a hotel in the Times Square area, so she’s familiar with some of the things we sketch locally.  We found out we had both gone to the Barcelona for the International Symposium. It turned out we both took a workshop run by Jim Richards - she found a picture of the whole group.  When I finally realized I was teamed with someone who I'd already met I found a Barcelona picture of a group of us having dinner in a Tapas restaurant.  We were sitting one seat away from each other.  What a small world it is. Pictures of us receiving each other's sketches 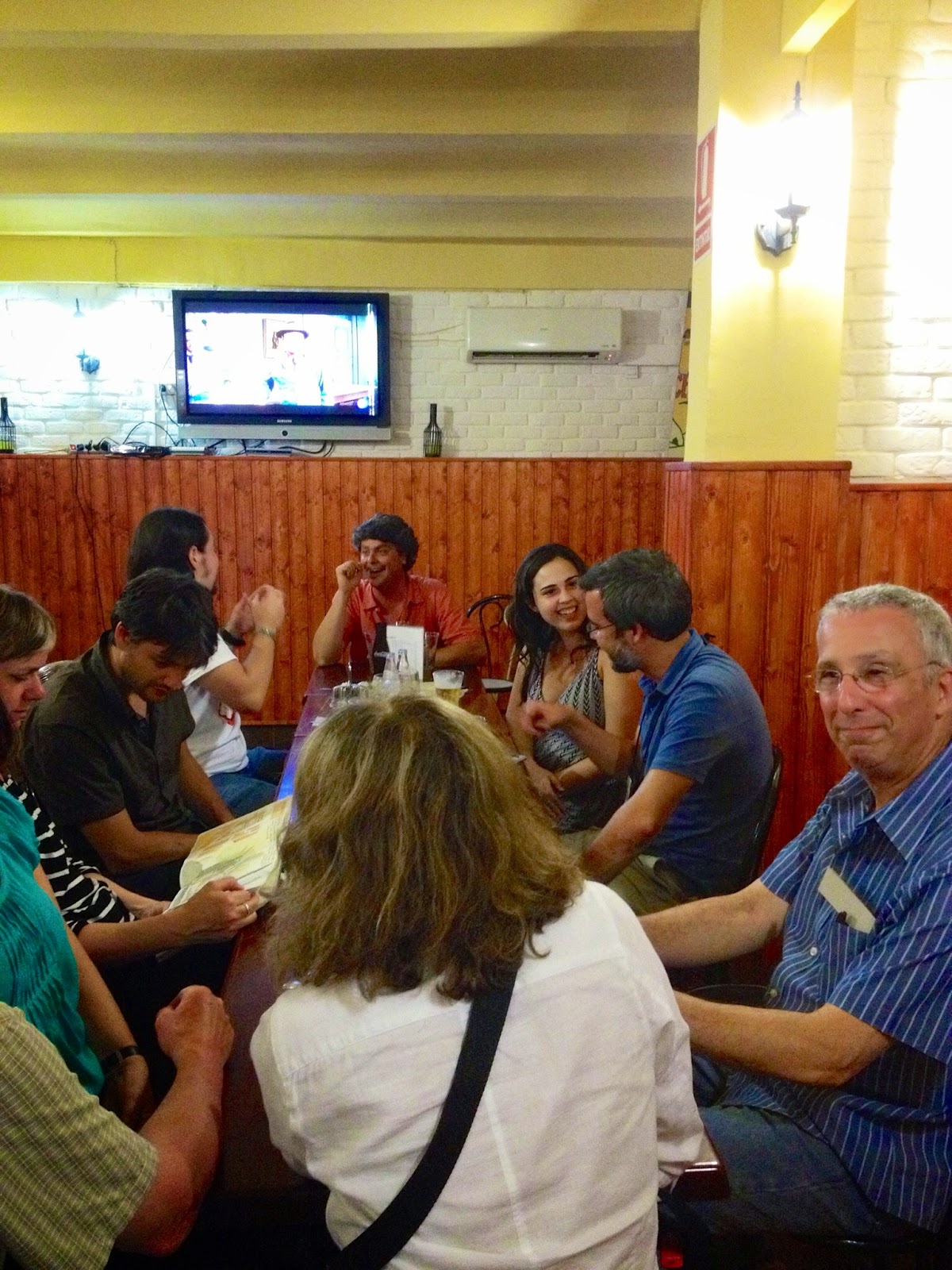 We got around to discussing music.  I’ve always loved Samba.  I asked Fernanda to recommend music she likes.  She had eight different YouTube recommendations.  The three I enjoyed the most were Elis Regina singing the Waters of March.  It’s a classic Samba tune and I’ve heard it many times sung in English and Portuguese.  The video looks like it was done in the sixties and has had over 5 million hits.
http://www.youtube.com/watch?v=xRqI5R6L7ow

Fernanda recently went to a Matagrosso concert and recommended this:
- Ney Matogrosso singing a song from another composer: Martinho da Vila:
http://www.youtube.com/watch?v=n3-jyjsQuYA

The last song she recommended that was a hit for me was Chico Buaraque and Roberta Sá singing together with an acoustic guitar
http://www.youtube.com/watch?v=u0-iovg0mq4

This has been a great experience.  I'm hoping to be able to go to the 2014 Symposium that Brazil is hosting this summer.  As a result of the Sketch Swap, seeing Fernanda in her own country will be like getting together with an old friend.  But, the larger truth is that any time I'm sketching with someone else - it's like being with an old friend.

Posted by Mark Leibowitz at 4:09 PM