The Trouble with Ink Bottles

THE PROBLEM:
One of the joys of sketching has been the discovery of fountain pens.  However, it’s a passion that only slightly overlaps with the world of sketching.  Most people who are into fountain pens use them only for writing, … and I get that.  There is something joyous about how the ink flows from the pen.  The act of writing, the act of loading the pen with ink, the various nibs, the different qualities to the inks; there’s a lot to explore.


But using the fountain pen to sketch opens up a whole other realm.  Some pens are skratchy others glide effortlessly.  There is always a sense of friction.  The weight of the line varies and becomes part another element of artistic expression.  I could go on at length about this, but what I really want to write about is the trouble with ink bottles.


Filling the fountain pen has potential problems.  It puts your naked hand and fingers in close proximity to the ink.  If careless, the bottle of ink could spill.  Ink stains.  It stains intensely.  As you use up the ink it gets harder and harder to fill your pen.  It’s hard to stare into the inky depths of the half empty bottle to figure out where the liquid is so that you can submerge your pen in the ink.  You want the draw-hole in the pen nib under the ink, but not much deeper since you have to clean off the unwanted ink.

The potential to have your hand touch the rim of the ink bottle is great, in fact, in my case it’s inevitable.  This means every time you fill your fountain pen you get ink on your fingers.  Or at least it means every time I fill my pen that happens.  It’s easy to understand what a miracle ball point pens must have seemed when they first became available.


There must be a better way.  I’ve been searching.  I went to the Fountain Pen Hospital in New York to get their opinion.  What a store.  It seems there is almost no limit to how much money you can spend on a fountain pen.  The Fountain Pen Hospital acknowledged that it is a problem and that ink bottles used to come with a reservoir near the top.  Their two suggestions were to either always have an extra bottle of your favorite ink so you’re never filling from a near empty bottle, or to purchase a bottle of Mont Blanc 60 ml Mystery Black ink.

My favorite ink now is Noodler’s Polar Black bullet proof (dries waterproof) ink.  The Mont Blanc ink was worthless to me but the bottle had a reservoir  - of sorts.  I threw out the Mystery Black ink (which is a story in itself.  How do you throw out ink?  You certainly don’t want to wash it down the sink.) and filled it with the Noodlers.  It sort of worked and solved half the problem.  Using the reservoir enabled me to use the ink after more than half the supply was gone,  I still managed to get ink on my fingers. 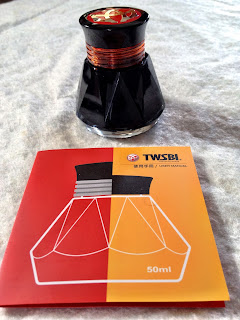 THE SOLUTION:
Several Urban Sketchers have written about their TWSBI pens.  They’re made in Taiwan and have a huge capacity.  The good reviews and the fact that the pen was unlikely to run out of ink during a day of intensive sketching had my curiosity.   I got the TWSBI 580.  It has a clear barrel and carries a huge amount of ink.  Because the barrel is clear, you can see how much you have left.  It writes smoothly and I’m looking forward to taking it out next time we go sketching.  This however, as I’ve mentioned, is a write-up about ink bottles. 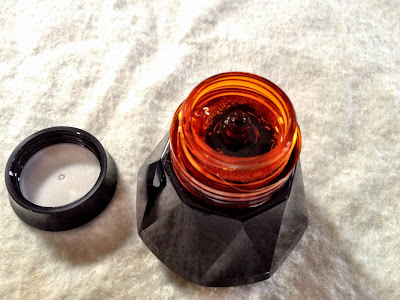 TWSBI sells their own Ink Bottles.  They have the cool TWSBI logo on top, but it’s what’s going on inside that is fascinating.  There is an inverted cone inside that fills with ink.  The whole bottle could almost be empty and you’d be able to fill the last couple of drops into the inverted cone and then dip in your pen to fill it up.  There’s also no guessing as to whether your pen is actually under the ink line, which means there’s a good chance I’m not going to get my fingers ink stained by touching the top of the ink bottle.  The bottom of the bottle is broad and flat and seems like it would take an earthquake to tip the thing over. (In comparison the Noodlers Ink bottles, which come filled to very top, seem precarious.) 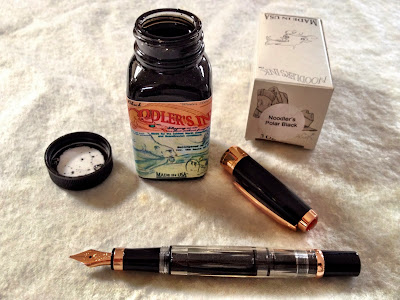 The TWSBI Ink Bottles is delivered empty so there’s no problem discarding the old ink - just fill it with your favorite.  So, what I’ve just described is very good news for all the pens I’ve collected previously.  It means clean, easy, safe pen refills.  But the story gets even better when you try to fill the TWSBI pen in the TWSBI Ink Bottle. 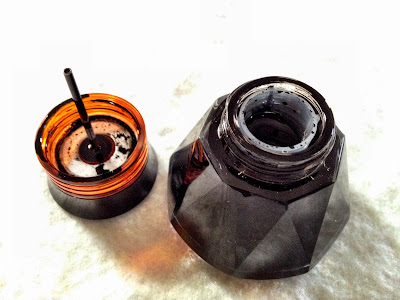 There are two ways to open the TWSBI Ink Bottle; the cap has two sections.  The first way gives you direct access to the ink and the inverted cone.  The second way keeps the bottle sealed and exposes a nub that sticks up.  The nub is connected to a tube inside the bottle that extends to the bottom of the cone.  The nib of the TWSBI pen comes off and you connect the pen directly to the nub.  Except for the part of getting the nib off and then back on again, you aren’t exposed to ink at all using this method.  Holding the nib with a paper towel solves the only potential problem nicely.  In the attached photos you can see the two ways to open the bottle and a conceptual cut-away drawing that shows the two methods of filling your fountain pen. 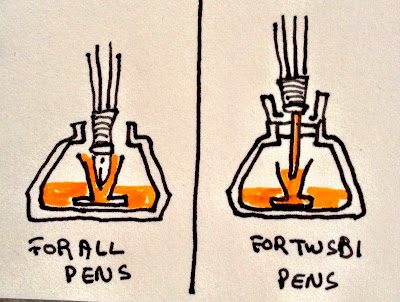