After a leisurely breakfast in Penn Station Saturday morning, I walked uptown along Eighth Avenue, facing directly into the vigorously cold northerly whoosh of the NW wind, thinking that as soon as I turned eastward on 44th Street it would be warmer. The street was a Valley of Shadows, not a speck of the bright sunlight, but the wind was now pushing at my back.

I saw the Shubert Theater ahead, across the street, it took a few seconds to spot Mark, sitting on his tiny stool, focused on his sketchbook. "Hey Mark, Hi!". Funny thing about that sketching spot. Great view of the catty-cornered theater entrance, just the right distance from it (couldn't pay for a better view - the iconic view - as a matter of fact), not a lot of foot traffic and, in order to take advantage of this magnifico facade, we had to face into the stinkin' wind.

I huddled behind the seated Mark thinking to use him as a windbreak and started quickly sketching. I think I was working on the image for about 10 or 15 minutes when Joan showed up. There was some discussion. Mark knocked the icicles off his glasses and I made some color notes on my drawing (you know, though, that any color notes I make are "advisory" at best) so I could finish it later on. 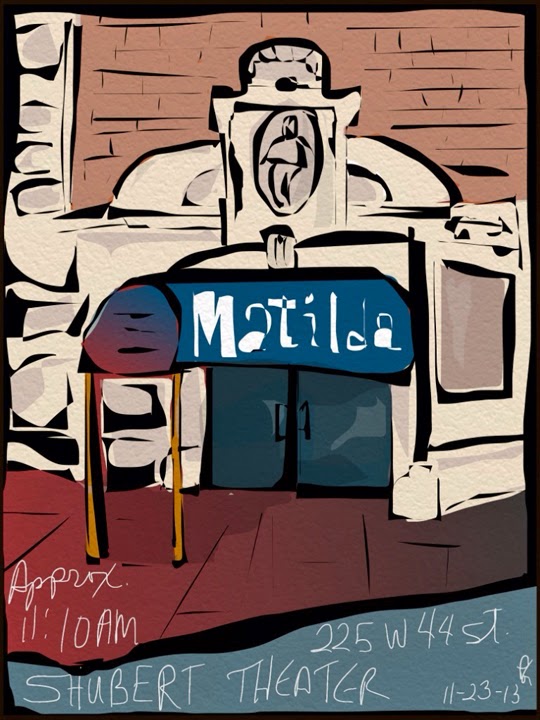 And then.....
The Angel came and solved everything.
Stay tuned.

She produced her ID, we each obediently flashed our driver's license, gate thingies and elevator doors electronically opened, and we found ourselves looking down at Times Square and across miles of Manhattan rooftops. 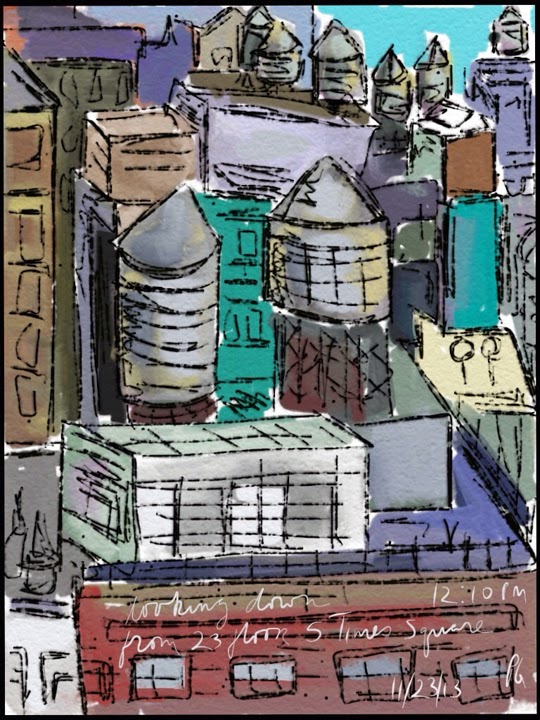 When walking down the street, any street, or even on the High Line, you glance up or "over there", one or two water towers come into view. Then you turn around and see another. When we looked out of that 23rd floor window we looked down on hundreds, seemed like zillions, of water towers. The view was so vast and low they seemed all bunched together, like cliques in a schoolyard at lunchtime. 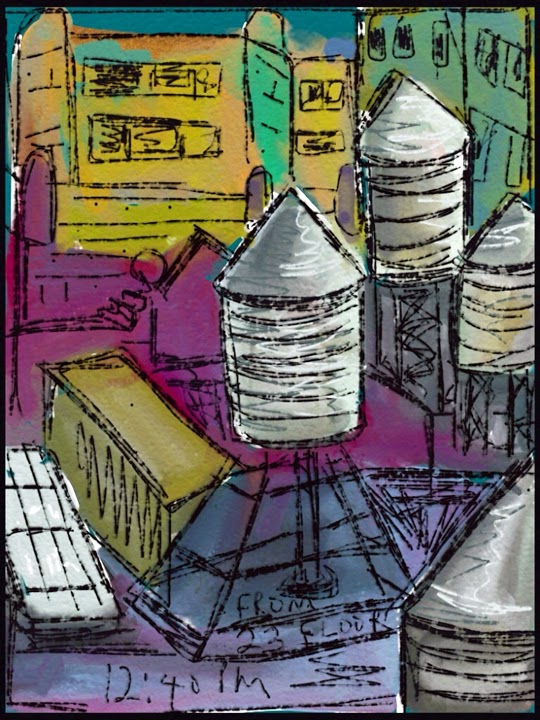 After we went down to the lobby to pick up another sketcher (Mark gave her our location over the phone), Svetlana took us up to the 15th floor and a view of Times Square from above. Flashing lights, hoards of cabs, construction, teeny tiny people - probably all tourists - scurrying here and there and everywhere.

I did the only thing possible. I removed my glasses and just dived right in. 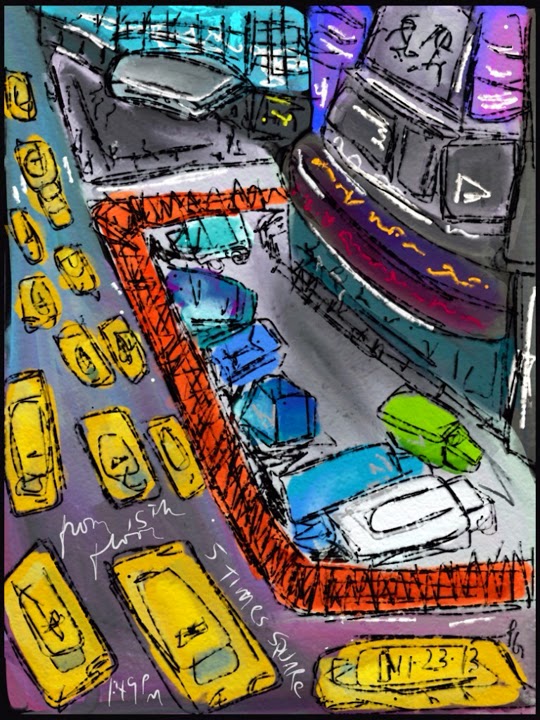 I forgot to snap a pic when on the 23rd floor but remembered to do it while on this floor just before we packed it in for the day. Too bad. The view from the upper floor, with bright sunlight streaming through the window (westward facing, I'm thinking) and a glimpse of river in the distance, showed a completely different city: older, packed tightly together, no sequins and flash. 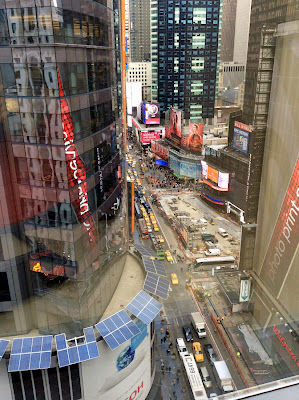 On this floor we were reminded that midtown skyscrapers dominate this area.  We were in a corner meeting room. This was the view a couple of the other sketchers chose. 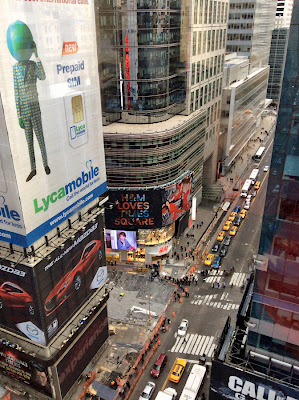 (iPad; ArtRage app; New Trent Arcadia stylus.
iPad took the photos after sketching was finished for the day.  I finished these three drawings in situ - from direct observation - no fiddling with them later.)


Part 2: Looking Over There
I was finished with loftiness but there was still time for the usual.  Maria or Marie, I'm not sure anymore. This was my second outing with the NYC Urban Sketchers but it was her first so I'm not the newbie anymore. 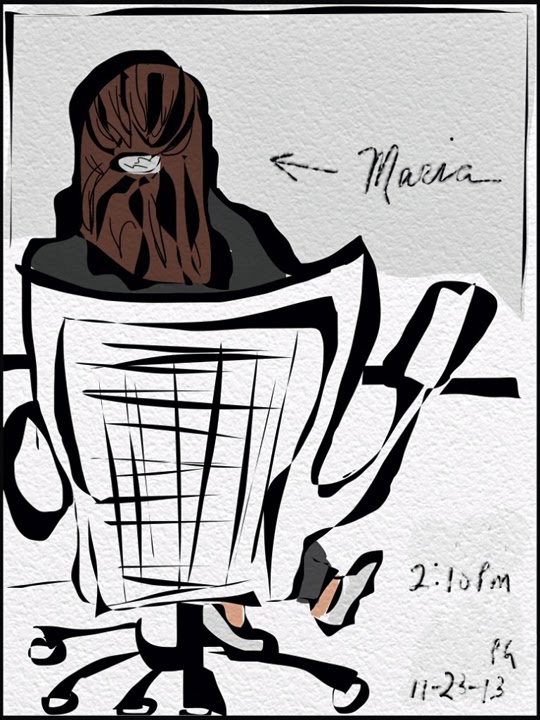 I met Joan that day. She also comes via Penn Station but lives way farther from the city. I think that she was standing and sketching on 7th Avenue and 34th Street while I was lounging in the station's warmth stretching out my coffee. 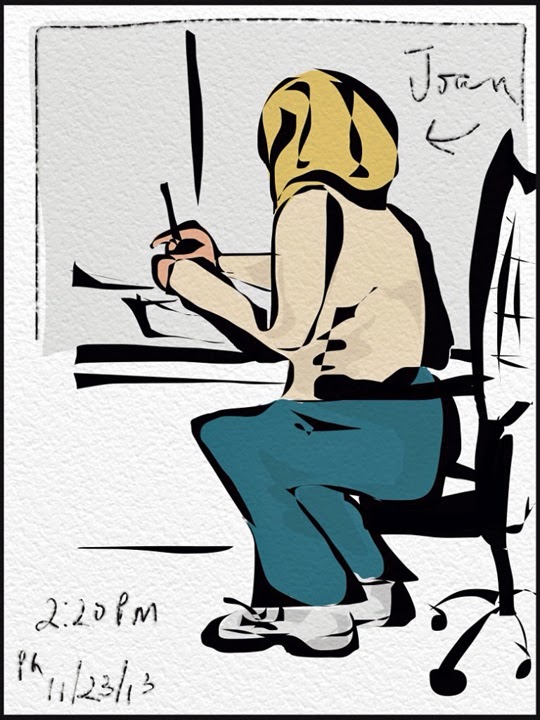 And this was Saturday's Angel with the magic gate/door/elevator-opening card. Swooped us out of the cold and up into the clouds. 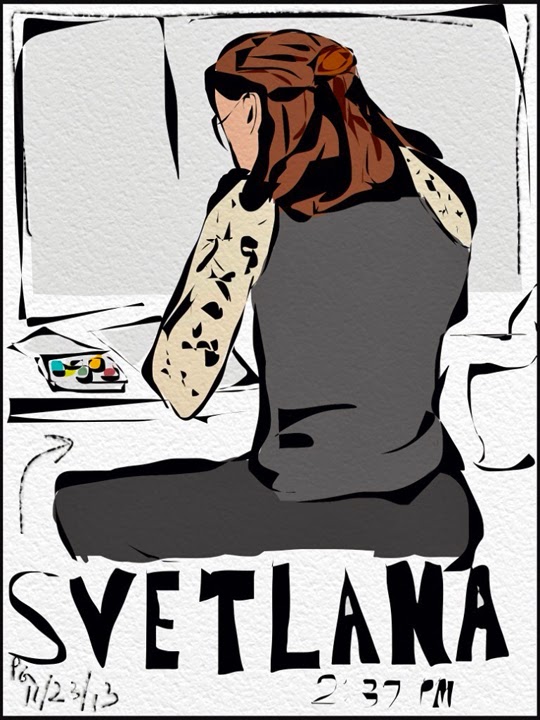 
Epilogue: Looking out over my coffee.

Back on the ground we split up. It felt a bit warmer, not crazy windy. I walked over to Bryant Park to see what I could see. The seasonal craft fair thingies were all set up - not tents - little structures like individual shops. Why don't I remember to take pictures anymore? Anyway, I had it in my mind to sketch there and scoped out a few possible scenes. The problem - crowded crowded crowded and no way to stand still, sketch and not be in everyone's way. No nook or cranny to tuck myself into. I wandered over to the skating rink where two people were shot by a kid the other week and watched for awhile. Crowded also. (No. I didn't think I was going to be shot at.)

I resumed walking downtown to 32nd and headed west to Penn Station. I NEVER look at the return train schedule otherwise I would find myself just rushing to Catch The Train. Bleh. Don't do that anymore. Train only comes once an hour on weekends and since I missed it I sat and had a coffee and spent the time doing one more. 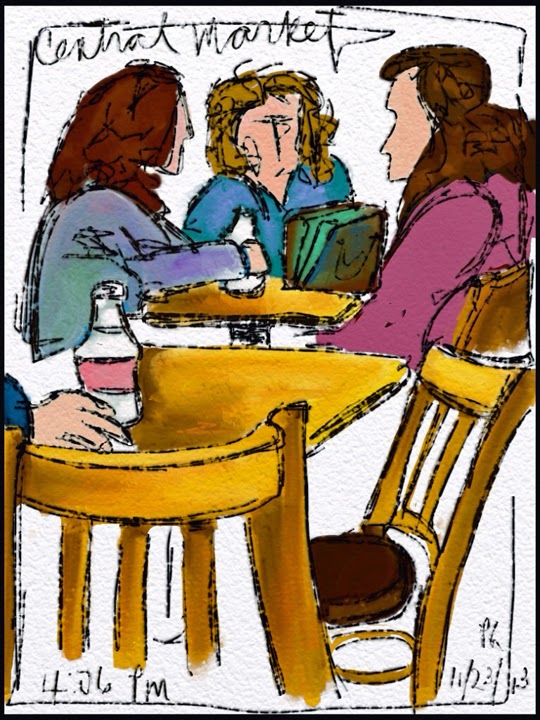 Posted by PatriciaG at 2:19 PM