(The following is a compilation of three blog posts)

Preamble:
Here I am again - having coffee and breakfast in the train station and everyone is wearing shoes (see this).  I purposely wore mismatched socks.  Today was iPat Air's first public city sketching adventure.  The purse felt much lighter. 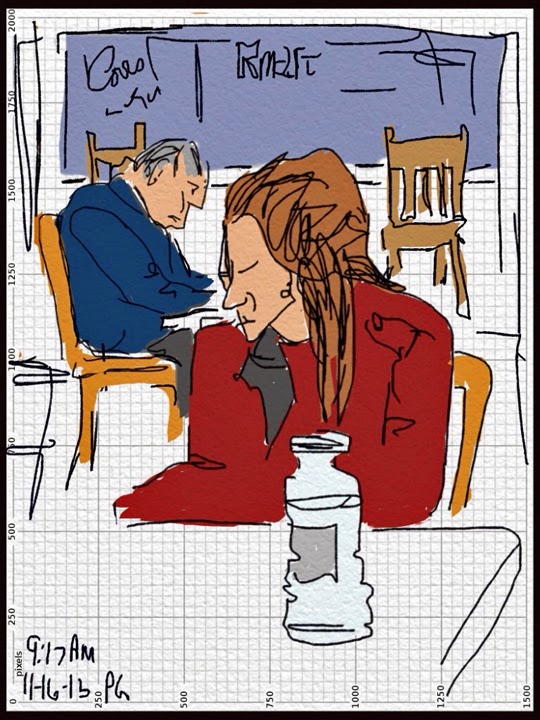 I had a spectacular day, did zillions of drawings, met new people and walked 4.8 miles through the city.  This is just the preamble. I think there will be, probably, two more blog posts wrung out of this day.

Part 1:
On Saturday morning, after breakfast in Penn Station, I headed up to 71st Street and Broadway where I was going to sketch with the NYC Urban Sketchers.  How cool is that?  They meet somewhere almost every Saturday but I work on that day which was a big disappointment.  I offered to work on the three upcoming holidays in exchange for some non-working Saturdays and, Yay!, I'm now an Official Urban Sketcher.  Mark announced the itinerary and I found him seated on the island (?) in the middle of Broadway, well into his sketch of the first apartment building, The Dorilton.  Holy moly, every square inch of that building is covered in curlicues and doo-dads and thingamabobs.  Throw in looking-up-with-mouth-gaping perspective and, well... you all know how I draw.  Sigh.  No way was that happening.  I tried.  I deleted.  Tried again. Next I shifted my efforts to the One Way sign and tried to sneakily draw the building behind it. Maybe stealth would work.  Sigh.  Soon Mia and Svetlana joined us - this was the group for the day.  I think the rain that started off the morning discouraged more people but at 10 am the sun was shining and the temperature was mild.

That sun started teasing iPat so I moved to another bench (ha! my back was now facing the frivolous, really beautiful but impossible building) and regained my sketching balance. 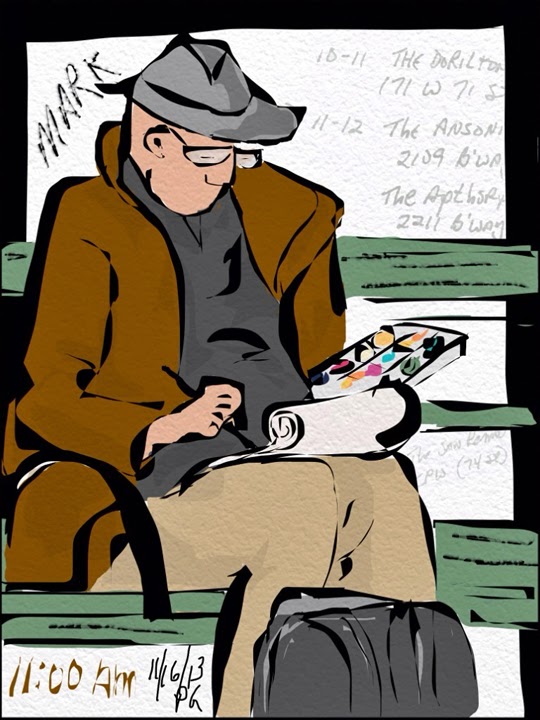 After an hour of sketching we left Svetlana who was really into all the detail (she rejoined us at the third stop) and walked a few blocks north to the next building.  I looked around and found a building facade that caught my eye and surprised myself. (I just realized that I forgot to put the hands on the clock.  Phooey.) At noon it was time to move to the next location - The Apthorp - a few more blocks up Broadway.  This building boasted a courtyard beyond imposing gates, and after Mark politely asked if our (teeny tiny) sketching group could sketch inside, the doorman quickly gave us the boot.  Rejection only lasted three seconds because we all spotted an interesting church and a seating area with the perfect view.  Ignore the fact that it was again smack dab in the center of Broadway with cars, cabs and buses hurtling towards us and the #1 Subway rumbling under - it was a Primo Sketching Spot and a good place to be for the next hour. 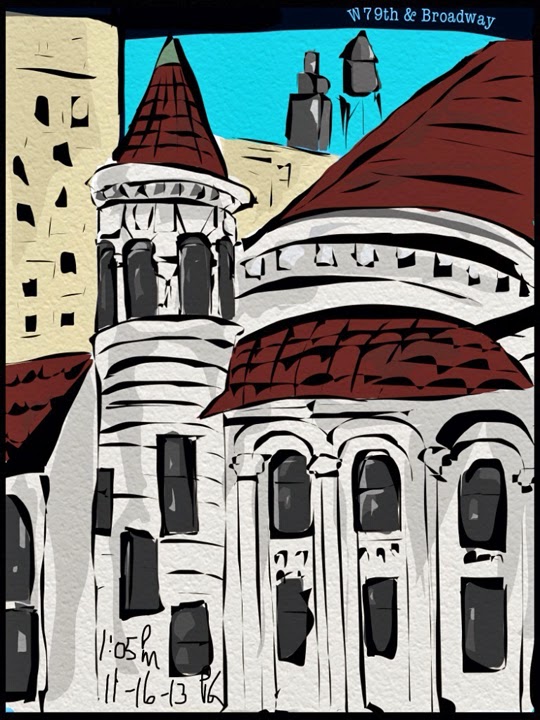 Part 2:
After an hour of sketching in the middle of Broadway,  Mark consulted with Siri and off we went to a very nice vegan restaurant on Amsterdam and 82nd Street, Peacefood Cafe.  I'm not vegan but it was Seriously Yum and if  my friend Benedicte had been there I would have bought her a double chocolate cookie and a chocolate-dipped macaroon.  After we fought our way out of our winter gear and settled down everyone took out their sketch books, ahem, and iPad.

I demonstrated for Mark a couple of my "techniques" - for Mia I used the vector tool in "fill" mode and drew the negative space and then the details. 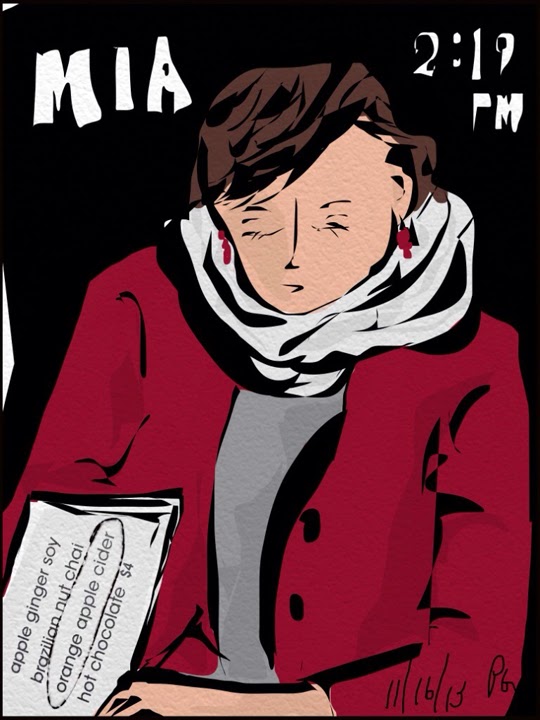 For Svetlana I used the same tool (still "fill" mode)  but drew her contour and how it was necessary to, without lifting the stylus, go back over the line so the shape would not fill.  Both methods result in wonkiness and distortion and make me happy.  (Maybe Mia and Svetlana aren't too happy but....). 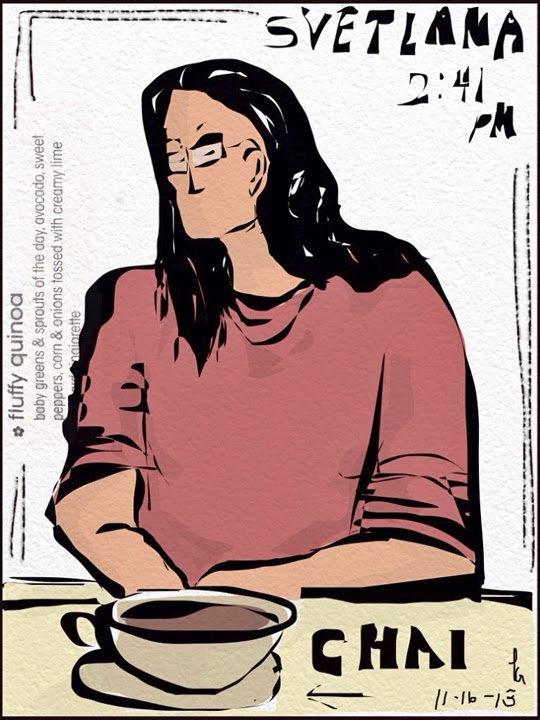 When the dishes were cleared away it was time to  show  the morning sketches to each other.

Next we  headed off to the last apartment building on the agenda - Central Park West and 74th Street.  We discovered that the bleachers for the Thanksgiving Day Parade were already erected on the park side of the street.  Taking advantage of the seating that stretched for about a zillion blocks we each chose alternate sketching subjects since it turned out that the view of the very tall building was not very enticing. 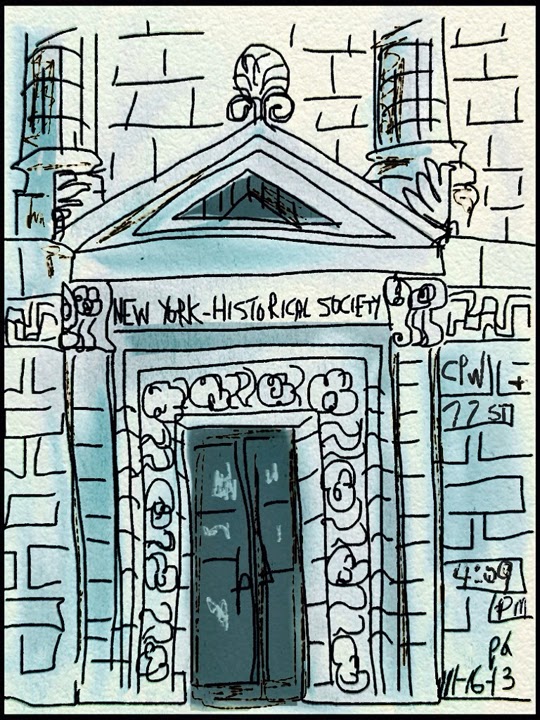 And then it was time to call it a day.  Mia and I walked downtown and split up at Columbus Circle.  I continued down 8th Avenue toward Penn Station, the sun was setting, girls were wearing party dresses, tourists were hogging the sidewalks and shady characters were starting to make their appearance.  I'm deep into J.D. Robb's Lieutenant Dallas books (reading one after another for mucho months) so I pretended I was walking her streets as I made my way around sidewalk blockers, avoided taxis and tried to catch the green light (failed miserably) at each corner.