Using the New York Bike Share was a lot of fun - my first time.  It's been a long time since I've been on a bike and I don't think I've ever ridden in the city.  Having bike lanes makes it a real pleasure, something I'd like to try again.

I did a lot of preparation for the event and created color coded maps to show Bike Pickup locations, Drop-off locations, walking maps and riding maps, since the plan was to walk and ride.


The great plan fell apart almost immediately.  What I realized was this wasn't a one day idea.  We could spend the whole summer sketching the gardens.  There are so many of them, and they're all interesting, different and beautiful in their own way.  We lingered, and spent too much time.  To even try to accomplish everything in my crazy plan would have turned the event into a forced march rather than the pleasure sketch crawl I think we all love.


Our first stop was the 11th Street Garden, which looked like it was lovely -  but was locked.  We setup in the street, looking in through the fence and sketched the gardens from the outside.  It might not be a general rule, but it seems that the gardens don't really open until around noon.


On the way to the Dias y Flores Garden on 13th Street we stopped at the Ost Cafe on 12th and Avenue A for a quick Coffee / Expresso.  We got window seats.  The windows were open so it was like sitting outside.  Great coffee, great atmosphere.  We all sat there sketching.  The clientele was my subject matter.  I did several, but this woman sitting on a stool was the one I like best. 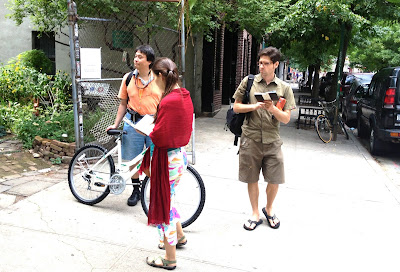 We made it to Dias y Flores and discovered something interesting. 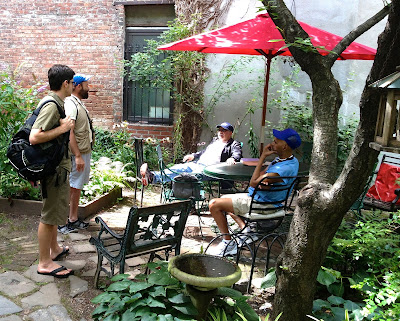 The people in the gardens were as interesting as the gardens themselves.  Here Jason and Richard are chatting with two of the locals.


The garden and the people who care for the garden became sketching subjects. 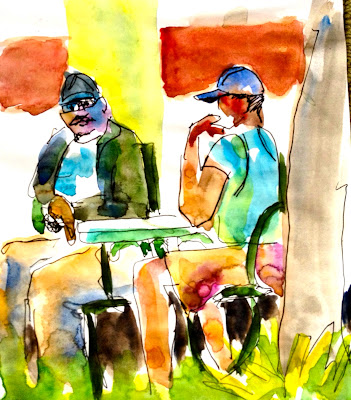 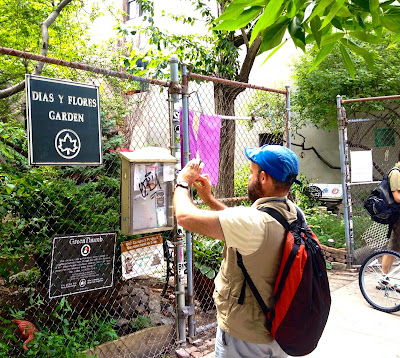 We might have had the most perfect weather of the summer for this event.
Posted by Mark Leibowitz at 1:27 PM