We met at this wonderful park in the Village, located at Bleeker and Sixth Ave.  Richard referred to it as Father Demo Square.  I've seen this park thousands of times and never knew its name.  In the write-up Richard described our sketch crawl as a "Dog's Breakfast" - a little of this and a little of that.  Never heard the expression but I liked it.

Got there about an hour early and bought a bagel and coffee.Sat on a bench in the shade to eat y breakfast.  I was sharing the bench with  Jim who was playing guitar.  The man was a human juke-box and I loved his music. 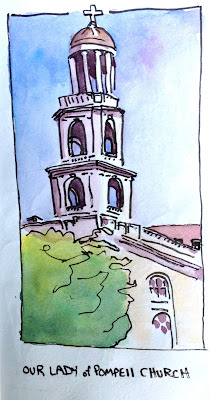 The church across the street was partially hidden by the shade trees in the park.  As I sketched the  church tower a couple of other NY Sketchers showed up. 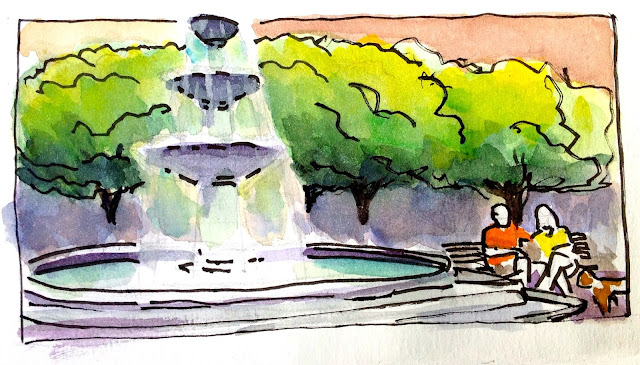 My big mental debate while sketching the fountain was whether to include the pigeons who kept flying into and out of the top pool.  I decided to leave them out first,  because they wouldn't hold still and pose but  mostly because they'd be lost as a tiny detail in the picture.

We left the park to find the little known Picasso Sculpture which is located at the NYU Faculty Apartments between Prince Street and Houston.

By the time we were finishing our sketches it got to be that time - time to decide on where to have lunch.


Svetlana suggested a vegetarian restaurant a couple of blocks away, where we shared lunch and finished our sketch day.