It was drizzling on Rector Street – the kind that you’re not sure if it’s raining or it is air conditioning moisture – city people will know what I mean. Then it got heavier and windy. I opened my umbrella and it immediately turned inside out. Shirley and Judy were sitting on a bench on (at? in?) South Cove, huddled under umbrellas. Not too many people showed up for Figure al Fresco today. It was only 2:00, still early, and Judy’s iPhone radar weather thingy was showing patches of rain here and there heading our way. We went for shelter in the nearby parking garage and decided to go to the The National Museum of the American Indian – New York, not too far away from where we were. But look! Patches of blue sky. Chock full of hope we went back to the benches. Well, then came the thunder, radar said the storm was heading for Jersey City, what d’ya know, right before our eyes, New Jersey, just across from us, disappeared. Poof. And then we disappeared also.
The model showed up and he was looking pretty good. What a shame. The artist organizer (whatever she’s called) and her assistant came driving up in the conservancy truck with the supplies under a tarp. We all stood around for a little longer until everybody came to their senses and the three of us slogged through the deluge to the M20 bus stop.
The bus travels up 8th Avenue but in order to get there it first has to zig zag a few zillion times and on this day there was massive rain, tunnel, day before a holiday and roadwork truck in middle of road, traffic. Shirley and Judy got off at Spring Street and I was supposed to stay on until 30th Street. Wait. The sun is out.
So. I got off at 14th Street, headed for the High Line, and started walking and sketching and (gasp) taking photos of flowers.
There is a big shady area around 15th Street so I stopped and sketched these buildings in the distance. The foliage is very lush on the High Line and, yes, a big mass of green was between me and the distant rooftops. 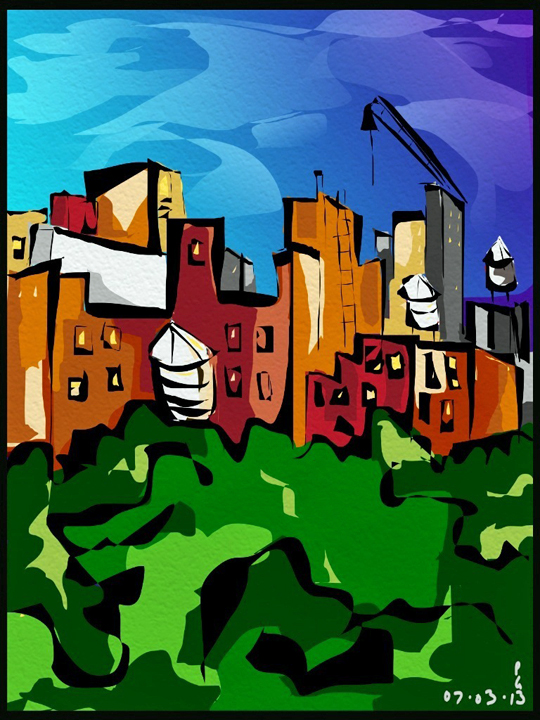 A bit below where I was standing there is a wine bar with outside tables and umbrellas. 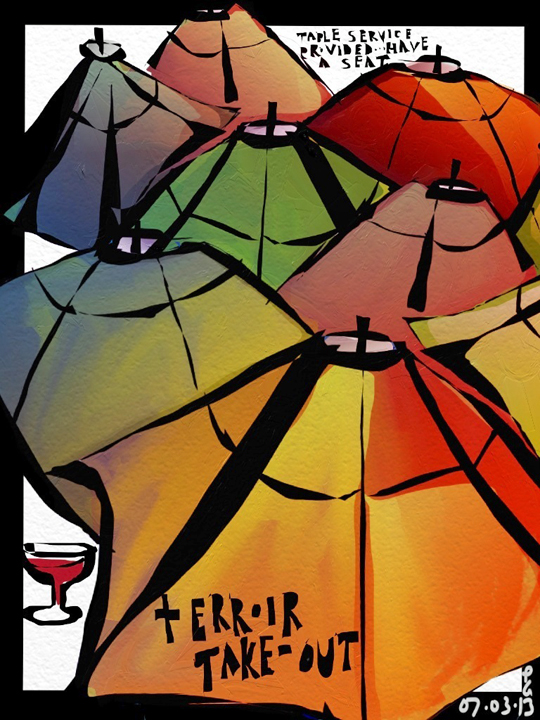 She was sitting at one of the tables with her friend. 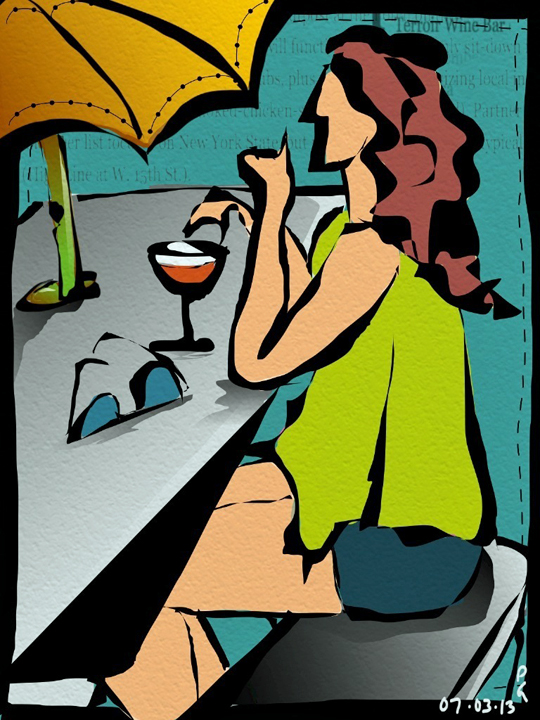 It was so hot and humid but the weather thinned out the tourists so the walking was enjoyable and I was a sweaty, sopping mess when I reached the station. A sweaty mess with unexpected sketches.
process and tools used:
iPad, Sketch Club and ArtRage apps, Pogo Sketch stylus. The drawings were done freehand from direct observation. A lot of artistic license was taken while adding color later while on the LIRR train and in the Recliner Studio Annex. What fun are white umbrellas?

Posted by PatriciaG at 3:38 PM