It was a perfect day for sketching.  Gorgeous light on a clear day that never got too hot. The South Street Seaport was devastated by Hurricane Sandy in October and its taken months to put it back together.  It was good to see all the happy crowds.  However we never expected the dark turn and drama that unfolded.

After lunch we discovered the Beekman Beer Garden Beach Club.  A sand beach with umbrellas, tables and a bar - built on a pier.  It was the first day they'd opened since the hurricane and we were among the first people to discover the beach, with it's perfect view of the harbor and Brooklyn Bridge.

After an hour of sketching the Beach Club was jammed with people enjoying the day, when  almost at once we all discovered the drama unfolding in the harbor.  At the very top of the bridge tower on the Manhattan side of the suspension bridge, 276 feet above the water, you could see a lone man walking. One look and you instantly knew this was terribly wrong.  No one is ever at the top of the towers.  We all realized we were looking at someone contemplating suicide.  Closer look revealed three people (police) climbing the cables to get to the top of the tower.  The beach party stopped and hundreds of people around us were transfixed by this scene.

Within minutes a helicopter showed up circling the area, it was joined by a fire department boat and then several more city boats came to the area under the bridge to join the potential rescue operation.

The first three points of the Urban Sketching Manifesto say:
1. We draw on location, indoors or out, capturing what we see from direct observation.
2. Our drawings tell the story of our surroundings, the places we live and where we travel.
3. Our drawings are a record of time and place.

I started a quick sketch, ... which felt a little obscene since we didn't know how this drama was going to end.  The police negotiated with the man for an hour, trying to move closer and backing up, moving further from the man.  Bridge traffic was apparently closed in both directions.  You often hear about crowds of people chanting "Jump, jump, jump" in situations like this.  The people all around me seemed stunned and sobered by what we were watching.  The crowd eventually erupted in cheers when the police finally got control of the situation. The last bit of the drama was watching the police slowly escort the would-be suicide down from the heights. 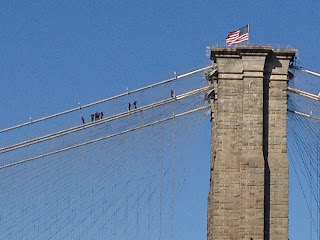 This week Marion Rivolier joined us from Paris Urban Sketchers.  Marion will be an instructor when we meet in Barcelona this summer.  Her course is - "Capturing Space Through Form and Color".  Kerry McFall was still in town from Portland  and joined us again with Griff.