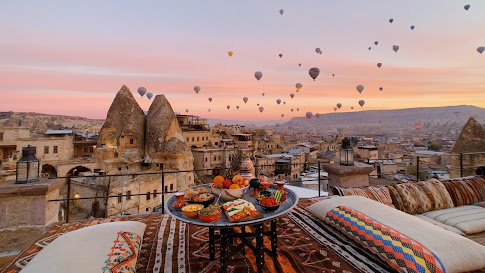 I'M NOT ONE OF THOSE PEOPLE
I’ve heard of Cappadocia, but if pressed I’d probably have guessed wrong about what country it’s in.  I might have even gotten the continent wrong.  It’s one of those places.  If you’ve been there you probably have hundreds of incredible memories.  I’m not one of those people.  So when Cecelia and Shawne suggested Cappadocia as a virtual sketch event it sounded like a good idea, but I really didn't know.
Wow.  Cecilia sent some photos and my eyes were opened.  It’s an incredibly beautiful place and also an incredibly ancient one.  Homer wrote the story of the Iliad about the war of the Greeks against the Trojans.  It took place in prehistory about 500 miles from Cappadocia.  We’re not even sure Homer existed and many people doubted that Troy even existed, until archeologists discovered the ruins, … and more.  That ancient city - Troy was built on top of an even older city, and that one rested on top of another city even older.  In total, Homer’s city of Troy sat on top of the ruins of 9 older cities that had been destroyed or abandoned.  Modern people have lived in this area for as long as there have been modern people.

The first people to arrive dug caves into the soft stone. In time they developed the ability to dig cities into the underground with tunnels of several kilometers. A sophisticated pipe- and tunnel-system carried fresh air and water, and enabled the people to hide from enemies for long periods.

In the 5th century hermits started to settle in the valleys and to paint their caves. In the next centuries more and more hermits and monks arrived and a rich cave-architecture with colorful wall paintings developed.
AM vs. PM
We will be spending our morning, sketching Cappadocia.  In the afternoon our focus will shift to the architecture and domes of Turkey  (The Ortaköy Mosque and Hagia Sophia )
Cecilia, once again has created a special website for our adventure.
It includes remarkable photos and excellent links for you to explore.  You can start planning your sketching adventure now: 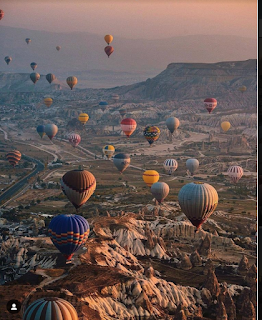