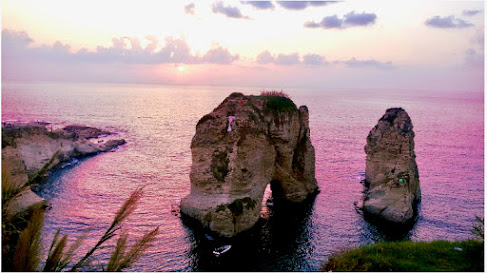 Designed and developed by Judy Abi Roustom and Joy Hecht

Since starting to work with Judy and Joy on this event almost everything has turned out to be a surprise. I was stunned by the color, the diversity and the rich history of Lebanon. They've included loads of interesting sites to help you visualize the art we'll create.

Lebanon is an ancient and beautiful country, home to a great diversity of cultures, the world’s oldest continuously inhabited cities, a richness of contemporary art and architecture, beautiful landscapes, and of course wonderful food!

Urban Sketchers Lebanon has invited us to join their sketchers on an artist's tour of their incredible country.

This is a joint USK Lebanon/USK NYC event. The Registration Link can be found below.

Here are some places you might want to explore on your trip.  To start, here's a map, so you can locate them.

The capital of Lebanon, with half of the country's population:  home to the government, major universities, museums, and dynamic neighborhoods filled with lively restaurants and bars.  Home to Damascus Street, which divided the city and the country during the 1975-90 civil war.  Home to beautiful old houses, many still riddled with bullets and broken windows since the civil war, as well as the gleaming new apartments, markets, hotels, and offices in the rebuilt (though not always vibrant) city center.

Note: These two adjacent areas are closest to the port, and were hit the worst by the explosion.  They are full of beautiful old buildings, restaurants, bars, art galleries, gentrification, and lots of trendy people.  They are roughly at sea level, so behind them (to the south of Gemmayze Street and its continuation in Mar Mikhael, Armenia Street) is a steep hill and a series of staircases often referred to as the "Achrafieh Stairs," because they go up to the Achrafieh neighborhood.

Link to Google Streetview on Armenia Street in Gemmayze:

Note:  This imagery was shot in fall, 2020, when the immediate damage from the explosion had been cleaned up, but of course most buildings had not yet been restored.  The banner saying "We are Staying" rebuffs the attempts by real estate developers to buy damaged traditional homes whose owners couldn't afford to restore them, in order to replace them with modern high-rises.

Images of Gemmayze, Mar Mikhael, and other parts of Beirut after the explosion:

Staircase photos, largely before the explosion:

Note: Raouché (or "pigeon rock") is along the western shoreline of Beirut.  The rocks themselves are an interesting formation in the sea near the shoreline. People go to stroll, watch the sun set, climb down a set of paths to the water, ride a boat through the arch in the rocks, and generally enjoy the scenery.

An hour's drive up the coast from Beirut, Byblos is the world's oldest continuously inhabited city and a UNESCO World Heritage site.  Its charming port, ancient ruins, and traditional souq (market) make it a major tourist destination as well as a lovely place for Beirutis to get out of town and dine on fish by the seaside.

Baalbek is a city some 70 kilometers northeast of Beirut in the Beqaa Valley.  It is known for the ancient city once called Heliopolis, whose ruins are a major destination for local and foreign visitors alike, and which was designated a UNESCO World Heritage site in 1984.

The third largest city in Lebanon, Saida is 45 kilometers down the coast from Beirut.  It is home to several crusader castles, including one built out into the sea.  It is also the site of a well-preserved 17th century caravanserai, a combination of hotel and warehouse used by traders bringing their goods into the city.  The old market of Saida is a lively and interesting place as well.

The Chouf Mountains run along a north-south axis through the center of Lebanon.  We are visiting Beiteddine, a 19th century palace used by the president of Lebanon and home to an annual (when there's no pandemic) festival of performing arts.  Near the palace is the traditional village of Deir el Qamar, with stone houses, fountains, and sweeping views of the mountains.