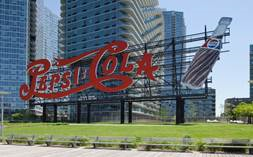 Gantry Plaza State Park is a riverside oasis along the East River near Long Island City, Queens. The entire length of the twelve acre park has spectacular, unobstructed views of the Manhattan skyline, including the United Nations and the Empire State Building.

The southern part of the Park showcases the name-sake of the site, four restored gantries originally built in 1925 and used to load and unload river freight onto Long Island RR cars for transport inland.

The northern section of the Park was the site of a Pepsi-Cola bottling plant, and the iconic cursive, red neon on metal Pepsi-Cola sign remains today, having been designated a NYC landmark in 2016. 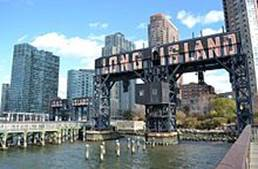 With the skyline as a backdrop, and the gantries, the sign, and the beautifully manicured park grounds as a set, this is a stage any artist will enjoy sketching. In the morning we will sketch in the southern part of the Park, two sets of gantries and the skyline of Manhattan. We will eat lunch in a grove of trees with plenty of shade near the southern-most pair of gantries. In the afternoon we will head north to the Pepsi-Cola sign, construction barges on the river and views of the Ed Koch Queensborough Bridge.

TRANSPORTATION:
From Grand Central Terminal, take the 7 Train and get off at Vernon Boulevard - Jackson Avenue, the first stop in Queens. Exit the station at the back of the train, emerging at 50th Avenue and Vernon Blvd.
Walk 3 blocks north on Vernon Blvd to 47th Road, turn left and walk 2 blocks west toward the East River. The Park entrance is straight ahead, although partially blocked by construction. Just walk on the sidewalk on the right side of the street, past the Dead End sign, and you will enter the Park.


Please RSVP to Alan Wernicke at:  alanwernicke@yahoo.com
If you are coming late
or you cannot find us,
call or text Alan at 917-685-5748

Posted by Mark Leibowitz at 2:39 PM