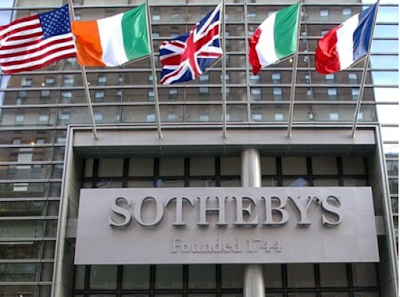 The world famous Sotheby’s not only auctions off works of art and other valuables, they also display them in many floors of galleries that are open to the public.  The sketching views from the upper floors are fantastic.

Afternoon:  1:30 - return to the galleries or the lobby,... or try your hand at the views off the roof outside the café, if the weather is inviting

Show and Tell:   3:00 reconvene in the lobby, for a short walk to Finnegan’s Wake Pub, 1361 1st Ave on the north west corner of 73rd St. and 1st Avenue, to share drawings, good stories and beer,  or wine if you're so inclined (food too if you like).

Directions to Sotheby’s:  (see map below)
The nearest subway stop is the Lexington Avenue local stop at 68th Street (the 6 train).
The express trains (the 4 and 5) stop at 59th Street and 86th Street.
The 72nd Street crosstown bus will take you right there; the 68th Street crosstown will get you to 68th and York.

If you’re coming by subway and the weather is bad, you can hop onto the 68th Street crosstown at Lex and 68th Street, instead of walking the four rather long blocks from the subway to York Avenue.

Posted by Mark Leibowitz at 6:44 PM No comments:

On the 19th of November, a group of local urban sketchers gathered for a workshop on collage, led by Joy Hecht.  Joy began doing collages last winter, and found them to be a very satisfying medium for conveying a sense of place - for her, much more effective than watercolors and ink.   Here's a couple of examples, from Paris, Newfoundland, London, and New York (in that order - yes, I travel a lot!). 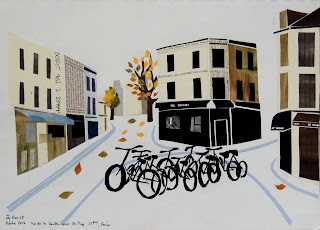 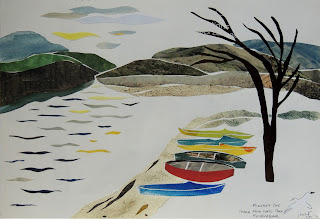 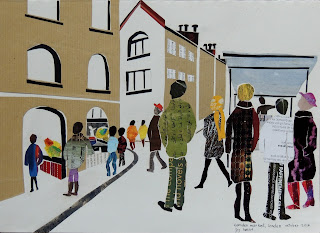 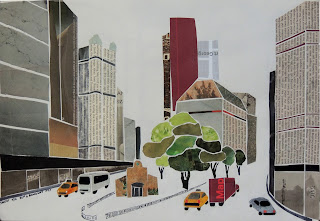 The workshop participants met at the Winter Garden, looking south over the Hudson River and the Jersey shore, with a glimpse of Lady Liberty in the distance.  After a brief presentation on techniques and materials, the members of the group got to work, producing some lovely results!   Here's a few examples of their work and some photos of the group at busy cutting and pasting.  I'm afraid for one of these I don't know the name of the artist - I hope she will identify her work!

By Ying Zhou, I think: 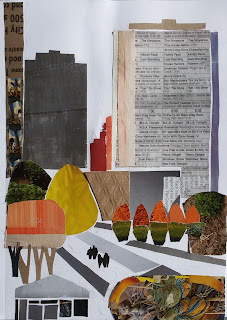 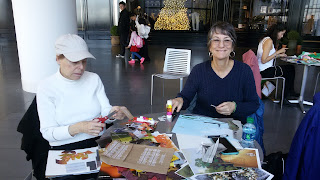 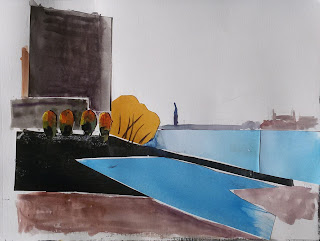 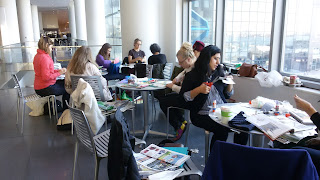 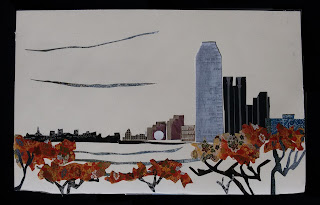 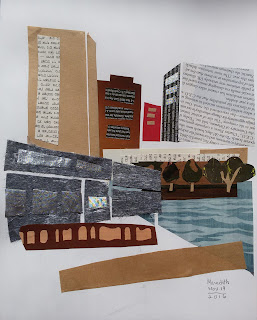 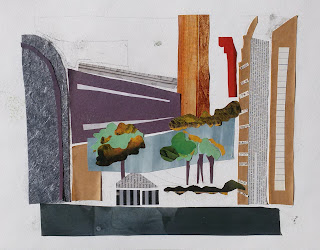 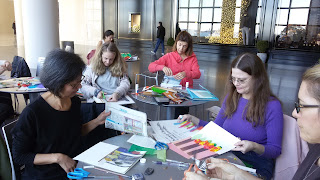 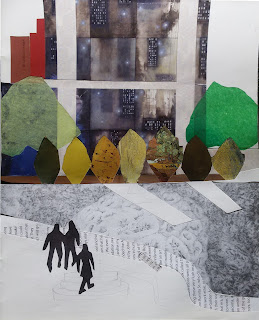 Join us on Thursday for a sea voyage and fishing expedition!


First we will meet by the Sea-Glass Carousel to sketch the beautiful etherial images of the glass fish as they rotate and glow when the carousel turns.  We will then take the Staten Island Ferry across to the St. George Terminal to sketch the real fish in the enormous salt water aquariums in the terminal.  Along the way there will be plenty of opportunity to sketch the people on the ferry, the Statue of Liberty  and the Manhattan skyline as recedes and enlarges on each leg of the journey.   Bonus sites include the views of the waterfront from the ferry terminal, the view of Manhattan from the St. George terminal and the murals in Staten Island Borough Hall across from the terminal.  Bring your lunch, stool and lots of blue and green paint! NOTE: If it is not raining we will meet at 10:00 to sketch the Sea-Glass Carousel.

If it is raining we will meet inside the Ferry Terminal and sketch the views of the waterfront from inside the terminal.
11:30 AM TAKE THE FERRY TO STATEN ISLAND

SEA-GLASS CAROUSEL is located at the south end of Battery Park near the intersection of State Street and Water Street.

TRANSPORTATION:  1 Train to South Ferry Station.  The exit from the subway will be on the plaza in front of the Staten Island Ferry and right in between the carousel and the ferry terminal.

Please RSVP Directly to Raylie Dunkel at raylie@verizon.net.  Note: While an RSVP is not required doing so will mean we will be looking for you at the various locations.  Looking for us?  Call Raylie at 201-978-6387. Bring a stool.  Bring lunch if you like or there are vendors in the Ferry Terminals.

Posted by raylie dunkel at 10:47 AM No comments: 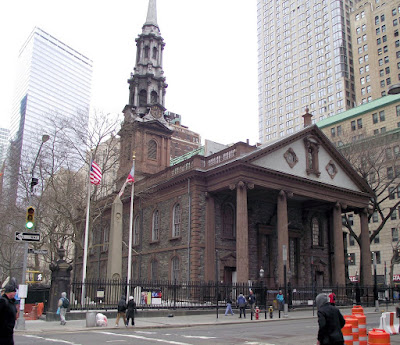 The forecast is predicting a gorgeous day
in the mid 60’s
and we’re going to be outside -
sketching St. Paul's Chapel!

History
St. Paul's Chapel is an Episcopal chapel located at 209 Broadway, between Fulton Street and Vesey Street, in Lower Manhattan. Built in 1766, it is the oldest surviving church building in Manhattan and also the oldest public building in continuous use in our town.  It was built on land granted by Anne, Queen of Great Britain. When it was completed it was the tallest building in New York City. It stood in a field some distance from the growing port city to the south. 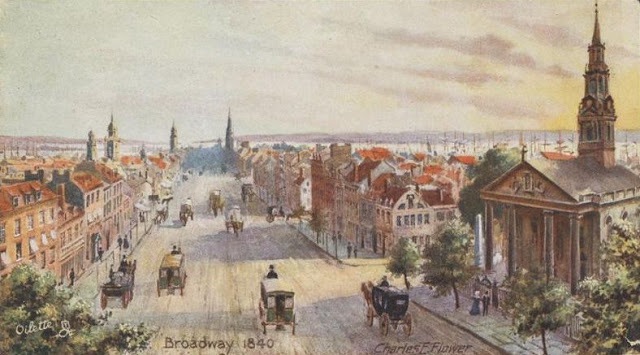 The chapel survived the Great New York City Fire of 1776 when a quarter of New York City burned following the British capture after the Battle of Long Island.  George Washington, along with members of the United States Congress, worshipped at St. Paul's Chapel on his Inauguration Day, on April 30, 1789.

September 11, 2001
After the attack on 911, which led to the collapse of the twin towers, St. Paul's served as a place of rest and refuge for recovery workers at the WTC site. For eight months, hundreds of volunteers worked 12-hour shifts around the clock, serving meals, making beds, counseling and praying with fire fighters, construction workers, police and others.

The fence around the church grounds became the main spot for visitors to place impromptu memorials to the event. After it became filled with flowers, photos, teddy bears, and other paraphernalia, chapel officials decided to erect a number of panels on which visitors could add to the memorial. Estimating that only 15 would be needed in total, they eventually required 400. 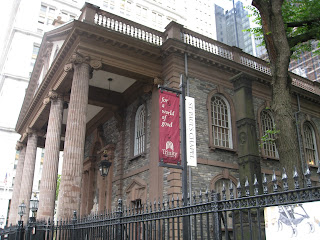 St. Paul's Chapel is a site that touches the heart and soul of New York.

Lunch:  12:30 PM.  Our special plan is to walk along Vessey St. to Brookfield Place where we will meet the Collage group Joy Hecht is running to join them for lunch.

Show and Tell:  3:00 PM at The Dark Horse at 17 Murray St (b/t Broadway & Church St) where we will share drawings, good stories and and a snack or refreshments if you're so inclined.

Posted by Mark Leibowitz at 5:16 PM No comments:

The weather is looking very good for Thursday so let's take advantage of one more outdoor event this year: a sketch crawl of the West Village.

The area west of 7th Ave and below Christopher Street is one of the oldest neighborhoods in NYC.  Its beautiful tree lined street evoke another era which we will capture as we move around the neighborhood and past icons landmarks.

LOCATION:  CORNER OF BARROW AND COMMERCE ST NEAR THE CHERRY LANE THEATER.

Note: we will meet here and work for about one hour then move on to another location. We will break for lunch in one of the pocket parks nearby.

Please respond directly to Raylie Dunkel at raylie@verizon.net.  Looking for us? Call Raylie at 201-978-6387.  Make sure to bring a stool with you.

Posted by raylie dunkel at 11:38 AM No comments: 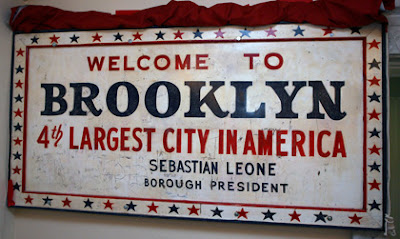 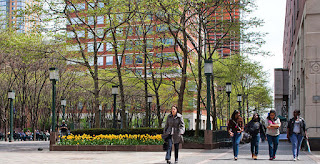 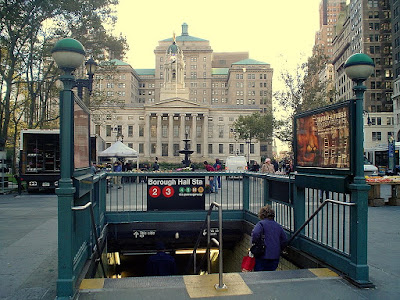 Where:   We’ll meet at the corner of Jay Street and the Myrtle Promenade in the center of the MetroTech area.  See the map below for details.

When:  Starting time is 10 AM, but if sleep is more precious than sketching time - come when you can, … we’ll be there.  Bring my cell phone below if you can't spot us.

Afternoon:  1:30 - we’ll be sketching the Civic Center area and the court buildings.

Show and Tell:  3:00 PM for the Social part of Urban Sketching.  It's a short walk to the Brooklyn Brewhouse:  229 Duffield St. b/t Willoughby St & Fulton St where we will share drawings, good stories and and a snack or refreshments if you're so inclined.

Posted by Mark Leibowitz at 5:02 PM No comments:

This has been a beautiful fall.  The trees have been in full color and have retained their foliage long into the season.  It could be over in an instant so let's take advantage capturing this fall's beauty before it is gone. And, what better place in NYC to find big beautiful trees than Central Park.

This week we will meet just inside the gates at the Conservancy Garden at the north end of the park. From there we can choose the manicured horticulture inside the garden or the wilder views along the Harlem Meer just beyond the garden's gates.

Please RSVP directly to Raylie Dunkel at Raylie@Verizon.net.  Looking for us? Call Raylie at 201-978-6387.  Bring lunch.  There are lots of benches in the park so you might not need to bring your stool.

Posted by raylie dunkel at 2:02 PM No comments: 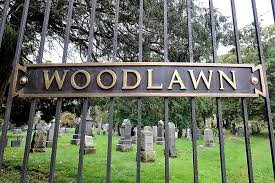 If the dead could sing - you'd hear them at Woodlawn Cemetary.  One of the largest cemeteries in New York City and a designated National Historic Landmark.   Founded in 1863 it has the character of a rural cemetery. Built on rolling hills, its tree-lined roads lead to some unique memorials.  The late autumn colors should be fantastic 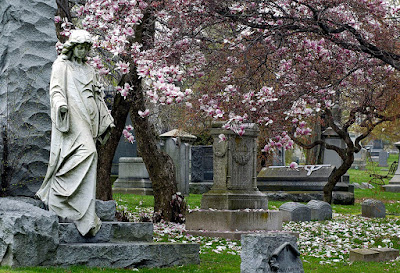 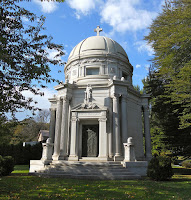 It is the final resting place of the famous and infamous as well as some of the greatest names in music including:

Where:  We'll meet at the Main Entrance:  Webster Ave & 517 East 233rd Street, Bronx.  Take my phone number to call or text if you're late and want to find us.

Show and Tell:  3:00 PM for the Social part of Urban Sketching.  It's a short walk to the Rambling House:  4292 Katonah Ave where we will share drawings, good stories and and a snack or refreshments if you're so inclined.

If you can’t find us

Posted by Mark Leibowitz at 6:46 PM No comments: