Fort Tryon - one of the most thrilling places in NYC to view autumn's splendor.

The park was the creation of philanthropist John D. Rockefeller, Jr., who bought up several of the estates beginning in 1917 in order to create it. He engaged the Olmsted Brothers firm – formed by the sons of Frederick Law Olmsted, (who of course designed Central Park) – to design the park, and gave it to the city in 1931.  Fort Tryon Park remains one of the city’s most beautiful outdoor pieces of art and one of the best presents ever received. 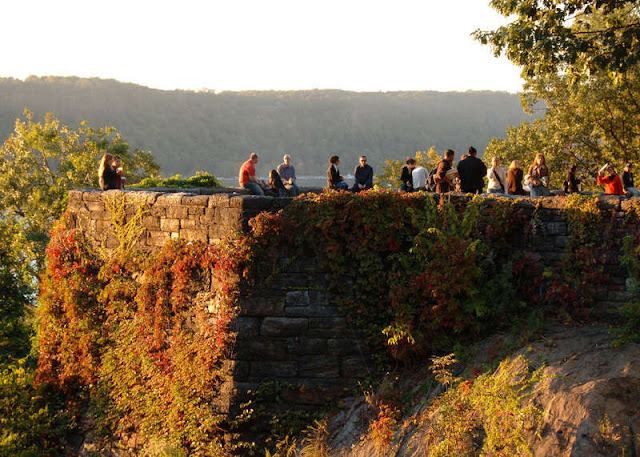 The pristine view of the Hudson River makes the park the perfect setting for outdoor lunches, bike rides, strolls and sketching!  The Heather Garden inside the park boasts over 500 varieties of plants, trees and shrubs, and breathtaking views of the undisturbed Palisades.


It's Weatherproof:
Backup Plan in case of rain - we'll visit the Cloisters:  Perched high above its northern grounds are the Cloisters, a branch of the Metropolitan Museum that houses nearly 5,000 medieval works in a reconstructed medieval monastery. (see map below)

HISTORY
Two Hundred and thirty nine years ago war came to New York City.  The Battle of Fort Washington was fought on November 16, 1776 during the American Revolutionary War. It was a British victory that destroyed the Continental Army's last American stronghold on Manhattan

Although General Washington issued a discretionary order to abandon the fort and remove its garrison to New Jersey. Colonel Robert Magaw, commanding the fort, declined to abandon it believing it could be defended from the British. British forces attacked the fort before Washington reached it to assess the situation.

On November 16 the British assaulted the Fort from three sides: the north, east and south. Although tides in the Harlem River prevented some British troops from landing and delayed the attack. When the British eventually moved against the defenses, the southern and western American defenses fell quickly. Patriot forces on the north side offered stiff resistance, but they too were eventually overwhelmed. With the fort surrounded by land and sea, Colonel Magaw chose to surrender. A total of 59 Americans were killed and 2,837 were taken as prisoners of war.  Under the usual treatment of prisoners of war in the American Revolutionary War, only 800 survived their captivity to be released 18 months later in a prisoner exchange; nearly three-quarters of the prisoners died.

After this defeat, most of Washington's army was chased across New Jersey and into Pennsylvania, and the British consolidated their control of New York and eastern New Jersey

When:   Saturday, sketching all day.  Start at 10 AM  but feel free to come later.

Where:   Fort Tryon Park.  Meeting at back of the New Leaf Cafe (the front side has parking on a roadway).

How:  Take the A Train to 190th Street.  The main entrance to the park is at Margaret Corbin Circle, at the intersection of Fort Washington Avenue and Cabrini Boulevard..  Walk one block north up a slight hill to Margaret Corbin Drive - a traffic circle and the entrance to the park.  Take the foot path and follow signs to the cafe.  There is also parking in the park.

Lunch:   12 Noon - Bring your own for an outdoor picnic in the park.

Show and Tell:  At 3:15 (weather permitting) we'll start walking to Refried Beans Mexican Grill, 591 Fort Washington Ave.  (a five minute walk down Fort Washington Ave a little past West 187 St) to share drawings, good stories and a beer or wine if you're so inclined.

Posted by Mark Leibowitz at 6:01 PM