(this is a compilation of two reclinerart.wordpress.com blog posts)

One day in May, Shirley and I, and then another day, Benedicte and I, went to the previews for the big impressionist, modern, contemporary and post war auctions at Christies. Remember the Picasso that sold for a whopping $179 million recently? The previews for those auctions. There was so much art that they had printed up a map on a nice large, accordion folded, card stock type of folder. Sturdy. Well, I collected "a few" of them to repurpose. I covered one with white and a bit of black gesso to get a grayish base and re-folded it so it would open as a book with two flaps that open out revealing the inside. I hope that made sense.

My book and I went into the city one day to see what would happen. I walked from Penn Station down to Union Square with the intention of sitting on a bench and drawing whoever sat within my view. I never made it to the benches. I was caught by the road crew working, started to draw the jackhammer guy (second picture below) in the middle of the outside of the book (front cover) and then his fellow workers to the left of him. The women with the red scarf and the sketchers behind her were drawn later after I reached Figure al Fresco down in Battery Park (back cover).

The farmers market was in full swing. 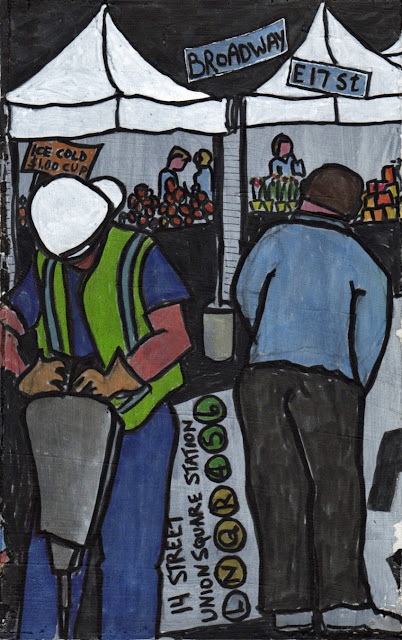 I started to walk through the crowds making my way down to the #4 train at 14th Street. This is the flap that opens up into a continuous image with the front cover. 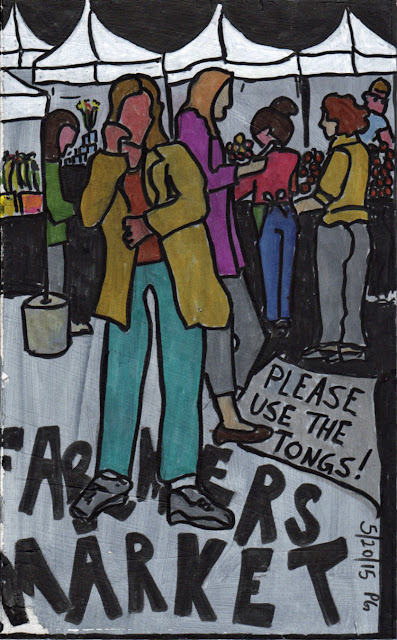 On the upper right there is a sliver of one of the sketchers drawing the red-scarved model. The woman with the red hat was sitting on the steps doing a crossword puzzle while her husband, the artist, sketched with the rest of us.

I took the bus back uptown to Penn Station. I could have taken the 5:35 (see below) but I don't like that train for a very stupid reason so I opted to sketch the commuters and wait for the 6:01. 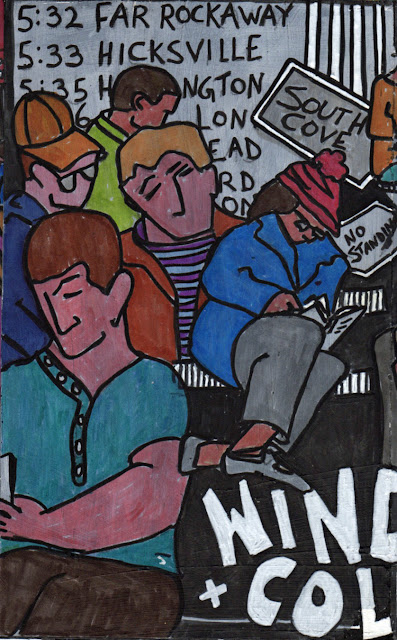 Just to clarify. If you open the whole, long thing and look at the outside from left to right it starts with the commuters and ends all the way on the right with the farmers market shoppers. A bit out of order chronologically but that how it turned out.

Believe it or not but this whole thing just seemed to come together of itself. At each point I just started drawing with very little forethought. One thing followed the other. At first I used a mechanical pencil but the rough surface was eating up the lead and my left hand was excelling at smearing. I switched to the Sharpie fine pen because it holds up well to rough surfaces but I couldn't see it very well and it wasn't fun. This all happened with the jackhammer guy. I switched to the Pitt Brush pen from that point on. Color was added a few days later while at home.

(This is the inside of the book)

The next day I had an early appointment in the city and, as is my custom, I ate breakfast in Penn Station. Central Market makes a nice omelette, the coffee is good and there is such quick in and out activity at the tables that I don't feel guilty about lingering and sketching. After all, everyone else is hustling to get to work on time, and, ha ha, I'm not. I chose a table that gave me a view of the people waiting while the eggs, six pans at once, were being prepared. It is fun to watch. 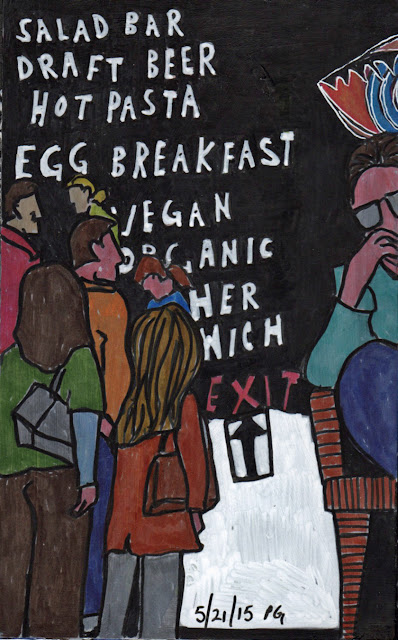 My appointment was for 10:15 and I had plenty of time to take the E train to Fifth Avenue and 53 Street which afforded me a longer walk but still allowed me to arrive early. While I was sketching the lady in blue, my name was called but I held up one finger, indicating I would like a moment more. Yikes. What a surprised, funny look I got from the technician - everybody is always in a rush she later told me - but then we looked at the sketch and discussed her little lamp that she has snazzed up. While I was waiting for the eyeballs to dilate I sketched the man in green and the same thing happened. I held up my finger. But now I was in different territory. This technician stood calmly because he knew exactly what I was doing. I had planned on walking downtown to one of the parks I like so I could sketch some more but my eye was über uncomfortable (unusual) and, even though it was a cloudy day, it was so bright to my sun-glassed, dilated eyes, that I had trouble keeping them open while walking. Plus there was a bit of a misty rain that was either doing something or not, couldn't tell, so I walked in the direction of the E train where I paused. I decided to walk down Fifth since I could always get on a bus if it really rained. I couldn't look at anything so I just followed the crowd and stopped at every corner, made sure the light was green, and crossed. No eyes closed jay walking for me that day.

At 42nd Street I entered Bryant Park and discovered it was Fleet Week. Soldiers, Sailors, Marines everywhere. All sorts of macho demonstrations and music. For some strange reason I decided to sketch - I couldn't see but this seemed like such a good idea. There were empty chairs by the carousel, I turned one around, sat, took out my book and, all of a sudden I realized the eye no longer hurt and a horse was waiting for me and a band was playing. 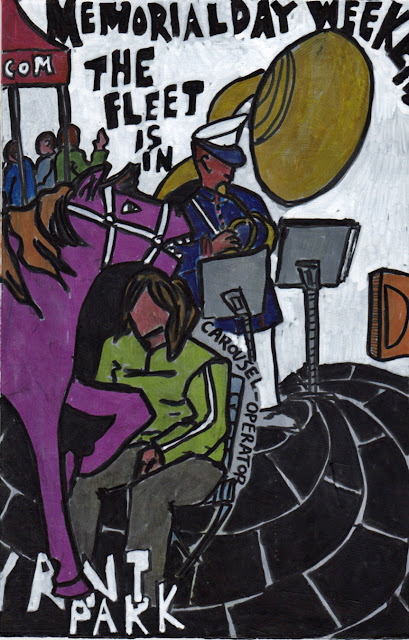 left the park and headed to Times Square and found a pile of metal crowd control barriers conveniently located so I could rest my book while I sketched the tourists milling about enthralled and excited. 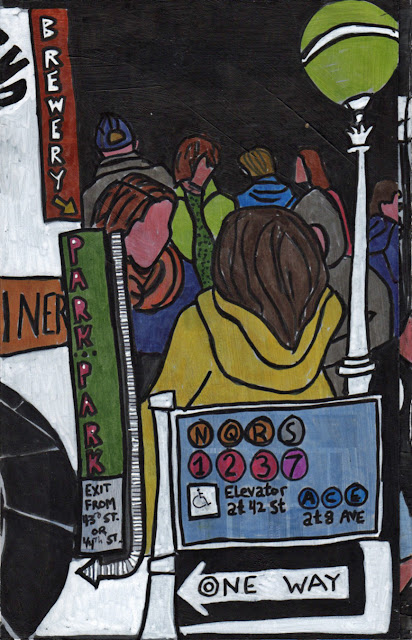 I dragged my weary feet back down to Penn Station and was glad the train was waiting for me.