The Cathedral Church of Saint John the Divine 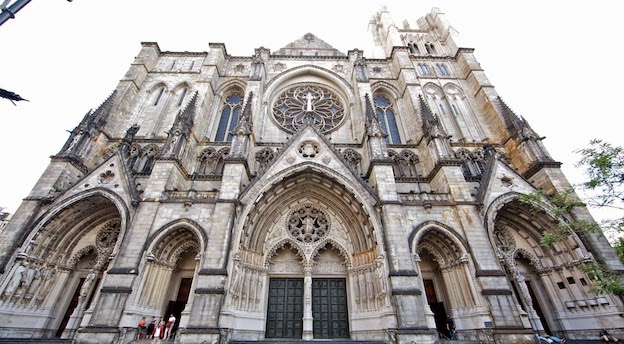 On Saturday let's sketch what might be NYC's most impressive church.

In a city of skyscrapers, the Cathedral impresses with sheer size. Its detailed facade towers over Amsterdam Avenue, and the building extends a full avenue block to Morningside Drive. The Cathedral is more than 120 years old, and remains unfinished. Despite incomplete construction, it is the largest cathedral in the world, making it a global landmark. The Statue of Liberty could fit under the church's dome. 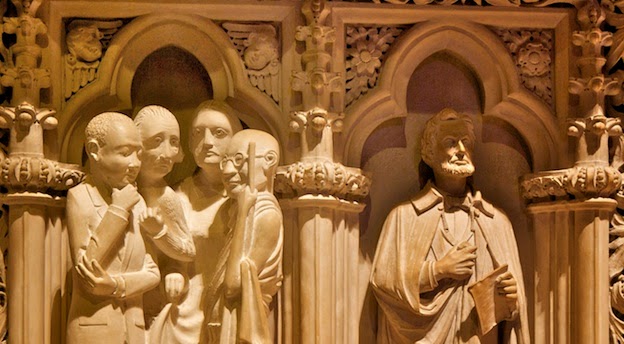 References to Saint John the Divine, the Cathedral’s namesake, are infused into the building. John is credited as the author of the Book of Revelation, relating his vision of the end of the world. The number seven is the most prominent symbol in Revelation, and structures the text itself. Sevens are therefore abundant in the Cathedral: in its seven chapels, north and south side bays, and in its dimensions. The digits of its length (601 feet) and Nave height (124 feet) both add up to seven, as do the digits in the circumference of the Great Rose Window (124 feet) and the number of angels surrounding its center (16). The ratio of the height of the Nave columns to the distance between them is 7:1. 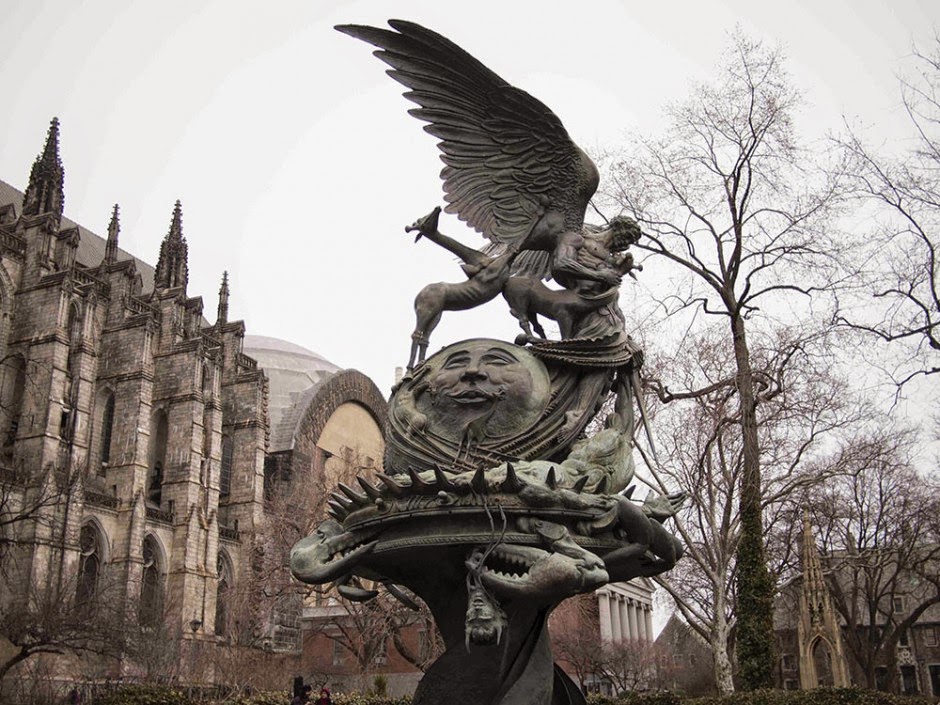 John’s symbol, the seven stars or candles, is echoed in the seven lamps above the High Altar. The colors of the paving stones in the Apse and Great Choir echo the precious stones named in Revelation as those adorning the walls of the New Jerusalem. Visitors will find many more examples of this “sacred geometry,” with its symbolic numbers and shapes, throughout the building.

Art Exhibits at the Church

The church regularly has special art exhibits that are always of interest.  There are three current shows:

Phoenix: Xu Bing at the Cathedral: Over the course of two years, pioneering Chinese contemporary
artist Xu Bing culled detritus from construction sites across the rapidly changing urban landscape of Beijing, and transformed it into his most monumental project to date: Phoenix (2008-10)

Stations:  Gregory Botts' collection of fourteen paintings rendered abstractly in tones of black, white, and gray, subtly parallels the traditional form of The Stations of the Cross.

Where:  1047 Amsterdam Avenue at 112th Street, one block east of Broadway.

How:  By Subway - take the 1, B, or C Train to the 110th Street / Cathedral Parkway station.
By Car - From the North and East sides: FDR Drive to 96th Street; west on 97th Street; north on Amsterdam Avenue to 112th Street

When: The action starts at 10:00 AM, and if you're running late - come anyway.  It will be good to see you whenever you arrive.

Afternoon:  1:30 back to St. John for more sketching

Show and Tell:  Mel’s Burger Bar, 2850 Broadway, b/t 111th St & Cathedral Pky - to share drawings, good stories and beer, coffee, tea or wine if you're so inclined (food too if you like).

Posted by Mark Leibowitz at 5:28 PM