The irony was that 60 Wall was selected because of the "near certainty" of rain.  Go figure.  We had every possible summer weather that day including a moment or two of actual rain.

It appears I've given up color for the time being, enjoying doing quick sketches and adding tone with a single TomBow pen.  On that quiet Saturday morning the lobby was populated by a few homeless people, seated in the the cold post modern architecture. 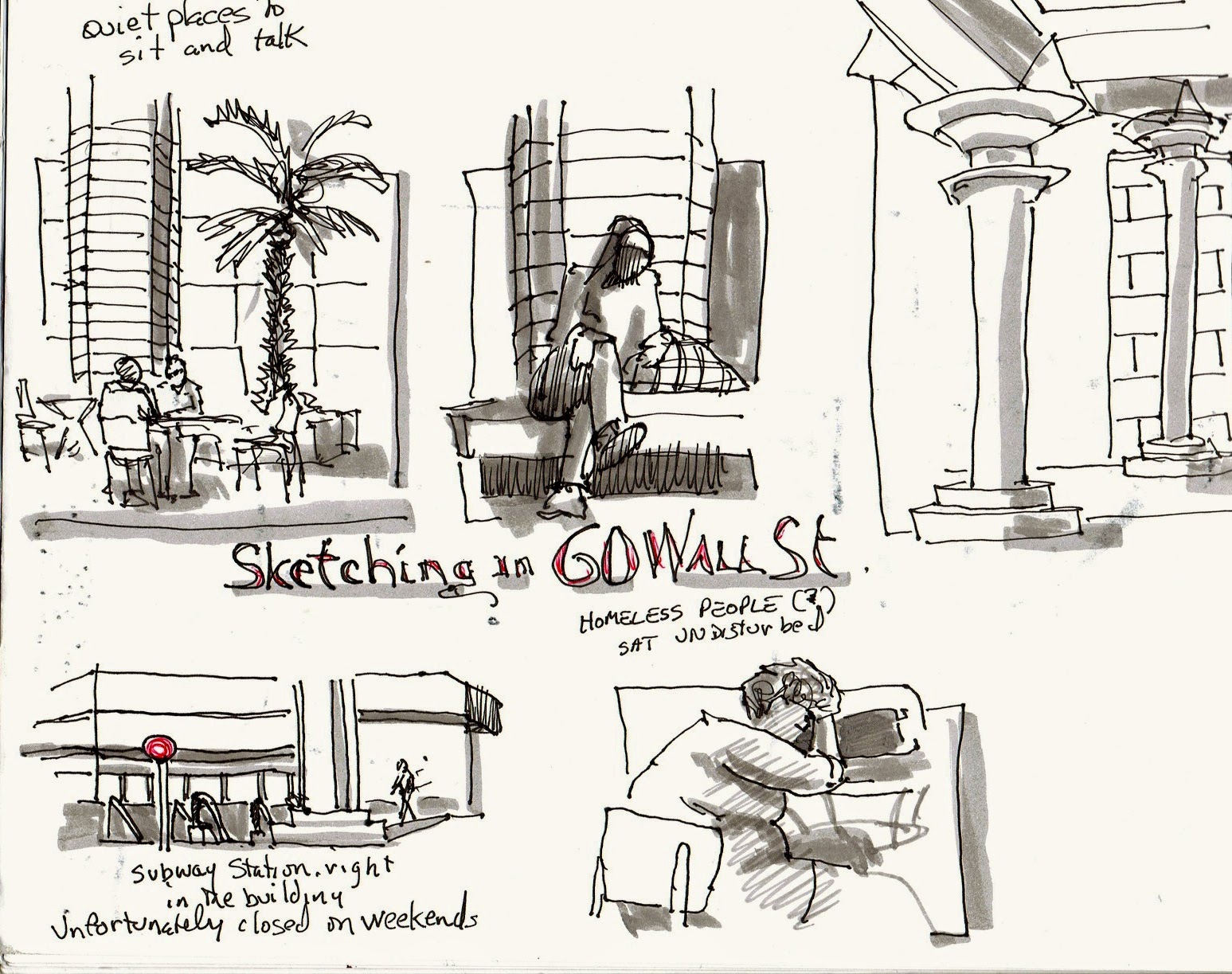 These first sketches were done indoors waiting for sketchers to arrive. However the sun was on full force so I walked outside and  setup a stool to sketch the street.

While drawing the page below I had one of those transcendent sketch moments.  Before this, it  happened most recently when we were at the Chinese Scholar's Garden in Staten Island.  It must have something to do with the sunshine, the sketching and magical ingredient of music.  At the Garden's there was a man playing haunting classical Chinese flute music.

This past Saturday it was a saxophonist.  He must have been setup across the street from me in a place that was blocked from my view.  He was playing a soulful version of Gershin's Summertime.  Sunlight was streaming through the buildings casting long rays of light.  The sound of the sax echoed between the buildings and I was lost in long moment of drawing.  It was about as close to heaven as I know. 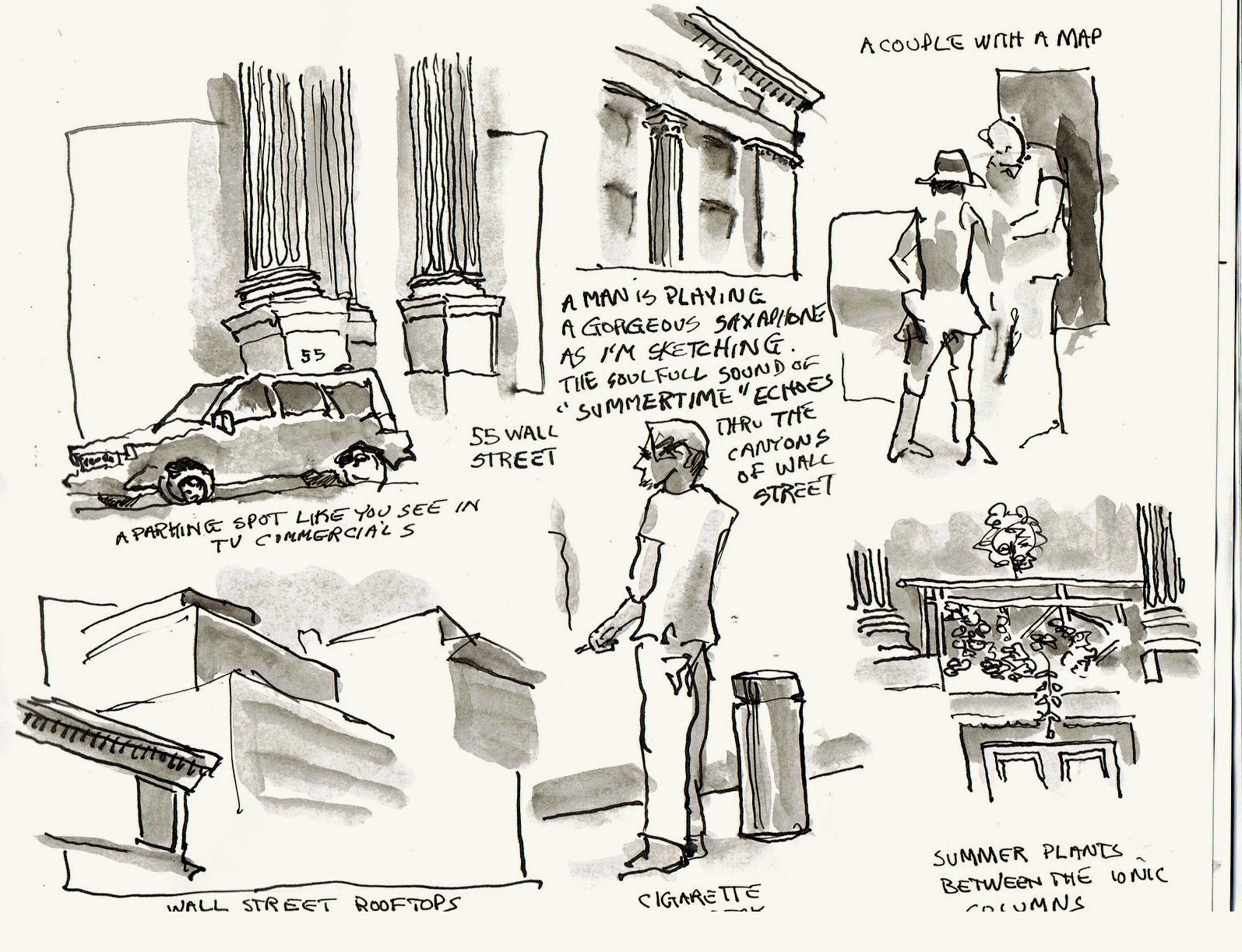 We found out that the Museum of Money (see below) was open and free that day.  They have a gorgeous curved staircase that would be lovely to draw, ...if you were in that kind of mood. I wasn't, and almost immediately regretted that I even tried.

I went up those stairs and found life size statues of the Burr and Hamilton duel frozen at the critical moment before they shot at each other.  Hamilton appears thoughtful and sad. He's older than any of the other image, and indeed, since he was mortally wounded moments later, - he didn't grow any older.  Burr on the other hand looks angry and feral.  The sculpture and history's opinion of the two men are clear to see.  There were also photos of Dow and Jones of the famous "Average".  Another photo of JP Morgan completed, what for me, were the iconic faces of Wall Street.

Later we sketched the Federal Reserve (see below) which houses a vast amount of gold.  It is purported to be the largest gold repository in the world housing over $400 Billion.  I can tell you they were not giving out free samples that day.  Mike Skelly made an interesting observation as we sketched.  He pointed out the contrast between the hot dog cart setup almost in front of the Federal Reserve - the pinnacle of our Capitalist society and it's smallest cog. 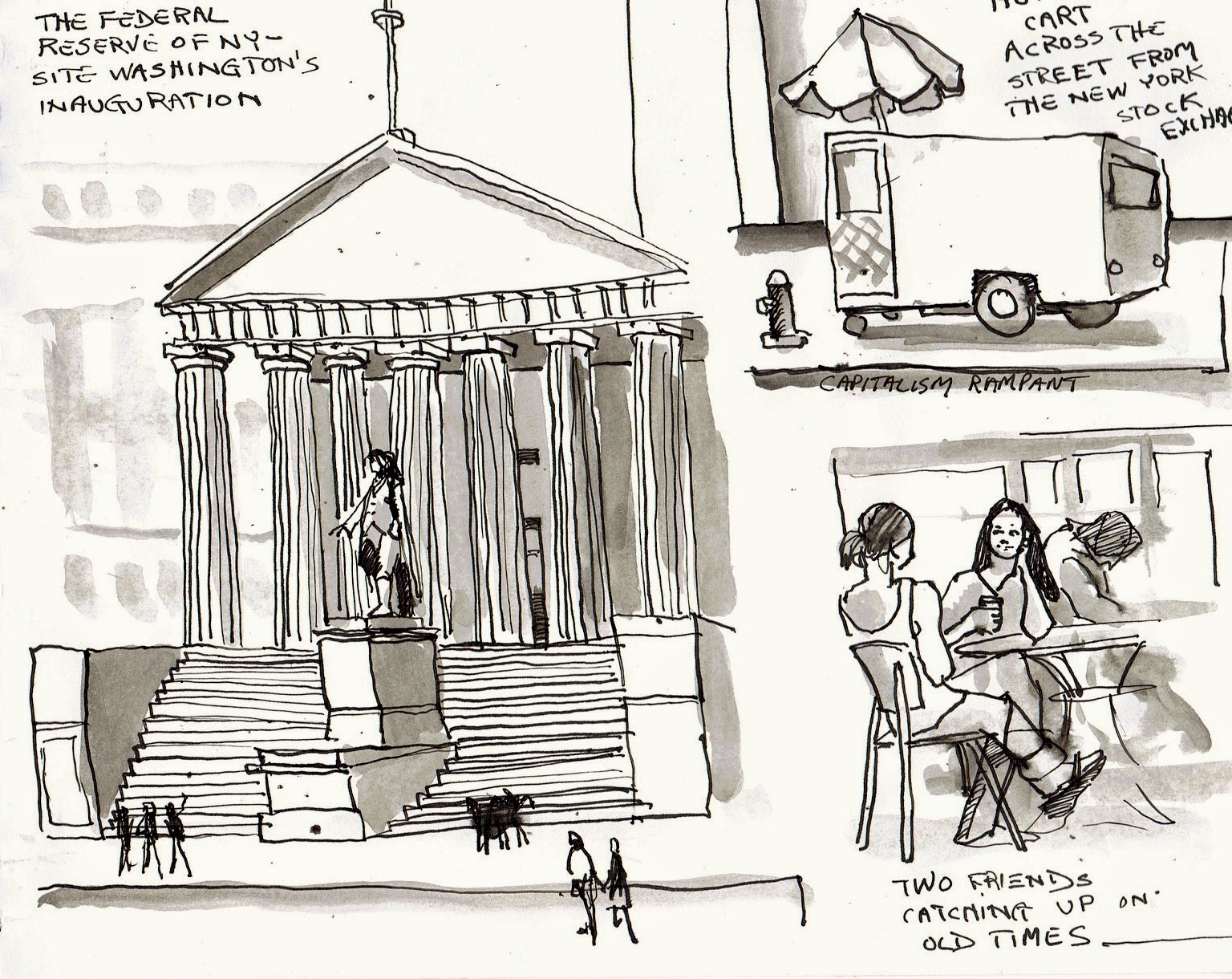 Later it eventually rained and we went back to 60 Wall Street.  The sketch below shows Mike working on one of his sketches, a fake palm tree and a pair of the ferocious looking guards who patrol the lobby. 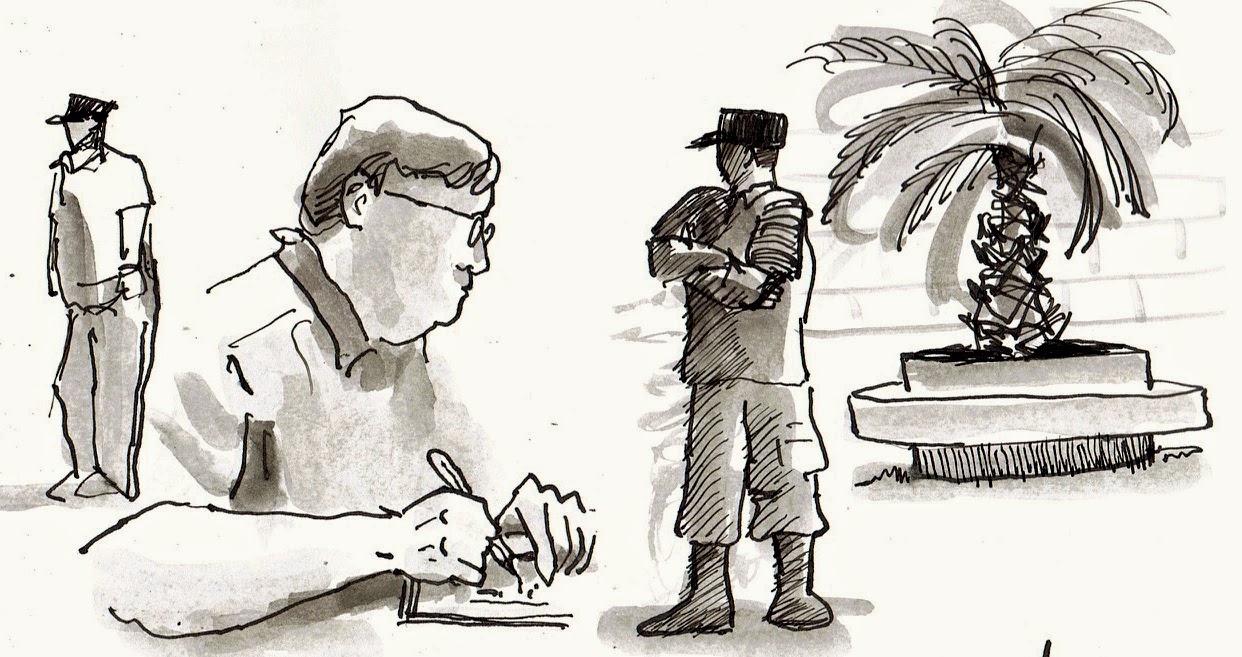 Posted by Mark Leibowitz at 2:09 PM