I was one of the NYC Urban Sketchers who was partnered with a member of the Brasil Urban Sketchers. My partner is Fabiana Boiman. Before the actual sketch day Fabiana and I exchanged several emails. She speaks and writes English well, so we had no trouble communicating.

Fabiana started sketching about 3 years ago, after not really drawing since she was a child. Like most of us, she is very critical of her work and fights her own inner art critic. When you see the sketch she sent to me you will see there is nothing to be critical about because the sketch is beautiful. In addition to sketching with the Brasil Urban Sketchers she sketches with a group called SketchJams. They draw musicians and the people inside the bars and pubs where the musicians are playing. I have done sketching in similar places so I know how much fun that can be.

The USK Brasil went to sketch along Avenida Paulista, one of the major avenues in Sao Paulo. It has lots of buildings and banks, and people in a hurry (and sounds very much like NYC). Along the avenue is the MASP (Museu de Art Sao Paulo). Although Fabiana was unable to sketch with the group on the day they met, she did her sketch from the same vantage point as everyone else. In NYC we were freezing and sketching from indoors looking out, but in Sao Paulo is was too hot to sketch outside, so they sketched from inside Starbucks. I love this sketch she did with the vibrant red of the building. What I really like the most is the reflection of the city in the huge glass windows of the building. That way I can see Sao Paulo in both directions. I just love it! My thanks to Fabiana for her sketch that I will treasure. 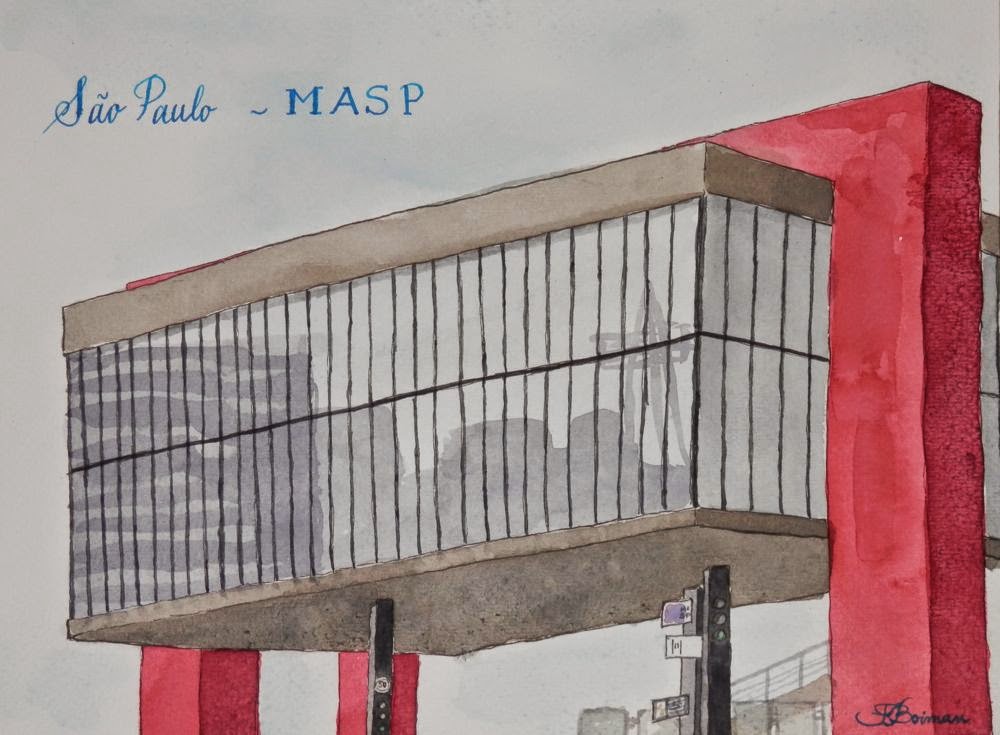 My sketch was mailed quite a while ago to Fabiana, but I did not hear back from her saying it arrived. I am hoping she received it and is enjoying my sketch of NYC as well as the additional sketch I sent her of an area near me on Long Island.

Posted by Joan Tavolott at 3:40 PM